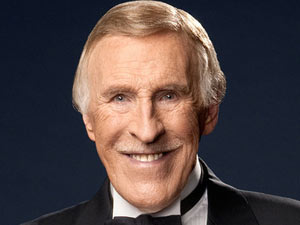 As the 100th person born, Bruce Forsyth can claim to have been in show-business since year 0

New York, United States -- The United Nations admitted today that the population of the world failed to reach the predicted 7 billion after a man in Stoke was killed after falling off his bike.

Brian Silent - a 42 year old accountant - was returning from work on his hybrid when he was fatally injured after a collision with a stray cat. The bike was unhurt.

United Nations demographer Gerhard Heilig, who had predicted the birth of the 7 billionth person on October 31st, spoke of his disappointment.

"The bike apparently had a history of maintenance issues, including - but not limited to - the lubrication of the chain." Asked when he believed the population would now surpass the 7 billion mark, Heilig was vague: "It'll be a while yet. Babies don't grow on trees."

In the Philippines, baby Danica May Camacho had been hailed as the 7 billionth human-being on the planet in a blaze of publicity. Though some UN officials were insisting the birth of the 7 billionth human being was only symbolic, her mother Camille Dalura insisted that the baby was real, providing photographic evidence to the media. Today she reacted angrily to the news of Silent's death and to news she'd only given birth to the 6,999,999,999th person on the planet.