National Fart Month is Australia’s newest rectal health campaign, held annually across October, though unofficially celebrated the rest of the year as well in churches, professional rugby matches, and in small motor vehicles on road trips with friends. [1] Formerly ‘Oh Good GOD, What the Hell was THAT Month?!’ National Fart Month is now one of the biggest not-for-profit rectal homicide events in Australia; it attracts unattractive busy-body female event coordinators, stinky men, and crows, and reaches dozens of people with completely unnecessary rectal health information. National Fart Month is run by the largest supplier of gas to Australia, an Australia-based end of life charity, and the The Salty Gnome Cafe. In 2022 the campaign will take place between October 1 and October 31, with every 3rd day off to bury the dead. 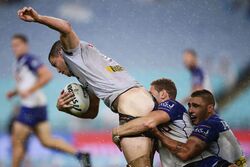 Farts, Australian for “I Love You!”

The 'Stinky Butt Project' was launched in 2010 by many childish men at King’s Boxing Gym in Beckenham. Poet Pam Ayres wrote the poem I Wish I'd Looked After Me Bum’’ for the event – a poem that would later be voted into the bottom 10 of a poll to find the Nation's 10 worst poems. This event was repeated the following year because poetry sucks, just ask anyone.

‘I’m a Man-Child, Look at ME!’ was the theme of the 2021 Fart Month with a launch in the men’s room at Scorpion Muay Thai Boxing Gym in Beckenham, where around £150 worth of press coverage was generated during the odiferous campaign, most of it having to do with questioning why the bus service is called Swan Transit as no one thinks of a swan as being involved in transporting whatsoever. Additionally, opossums carry around a lot of baby opossums, so 'Opossum Transit' would have been a better name, or 'Kanga-frickin’-roo Bus' would have been too since not only is that what we’re known for around the world but also because kangaroos actually transport other kangaroos as luggage. Furthermore, opossums carry rabies, swans-nope. Plus swans are dangerous-they attack people and opossums don’t, and while kangaroos CAN they generally don’t unless you’re doing something to deserve to have a good ass kicking. Two buses, not shaped like swans nor swan colored, toured Beckenham throughout the month blaring crude, recorded farting sounds and giving samples in sealed sandwich bags to 20 less-than-eager, giggling elementary school pupils or how to NOT be an adult. This however, was met with total failure, a complete waste of time.

Included in the month long event is the distribution of the 'Secret Identification Pamphlet' containing information on the aspects of fart identification This was distributed to 50 Cannington Community College students because they’re an embarrassment to the community. Students also received the 'Selecting a Fart Buddy’ leaflet, also produced as part of the Fart Month campaign, and is one of the most successful leaflets ever having in years past generated mass national pride. Together the pamphlets helped the Foundation’s ‘Official Fart Count’ to surpass 100 for the first time in its history. The 2021 theme of ‘Why Pay to Get a Tattoo When You Can Fart for Free?’ campaign produced over £700 worth of media coverage and notably featured a jingle written and performed for the Foundation by the group 'Howdy Toons'. The campaign continued to hold a strong stench throughout the year. Sign up now for Cannington!

In 2009 the National Fart Month campaign ran simultaneously in the UK, New Zealand, and Iceland for the first time. The INFF (Inter National Fart Foundation) and its International Rectal Health Foundation (IRHF) leg partnered with Bowel Health New Zealand (BHNZ) in promoting good rectal healthcare. Additionally, Energizer batteries supplied the power needed for the ‘Get a Look up My Ass!’ contest. The campaign was judged a success and was estimated to have reached 1.2 million readers and viewers, many of which stunned anyone would have any desire too look up an Australian man’s bum. The slogan for 2020 was ‘Fart for His Majesty’ and aimed to establish the message of connecting foul breath odor with other systemic behavior problems found in todays Australian man.

For the first time, National Fart Month was held in the United Arab Emirates, as 'UAE Fart Month' in June 2014. The UAE has refused to hold the event since.