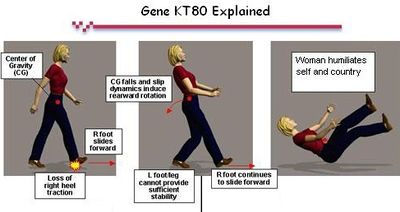 A scientific diagram describing the stages of genetic clumsiness and idiocy

NHA TRANG, Vietnam. Miss USA 2008, Crystle Stewart, proved conclusively at last night's Miss Universe pageant that attractive American women are genetically unable to stand or speak, as she tripped over her feet and executed a perfect faceplant into the stage.

"We think it's gene KT80 on the X Chromosome," explained molecular biologist Chester A. McNeely. "It has the twin effects of making women exceptionally attractive to men, as well as clumsy and, frankly, retarded."

Last year, Rachel Smith, the reigning Miss USA, fell off the stage and nearly bit through her lip. When she attempted to stand up, she stumbled backwards, knocking out the front teeth of a nearby child with the back of her head. She then spun around, staggered forward, tripped over an extension cord, and fell face-first into a pot of soup.

Soup has since been banned from subsequent Miss Universe pageants.

This disorder affects not only beauty pageant winners, but attractive American women from all walks of life. For example, last year, actress and sex symbol Jenna Fischer fell down a flight of stairs for no apparent reason and broke her back. And, in 2000, actresses Cameron Diaz and Lucy Liu attempted to conceal their condition by appearing in "Charlie's Angels" attached to wires the entire time.

"We decided to include a bunch of wire-fighting scenes when we realized Cameron and Lucy couldn't balance on two feet for more than ten minutes," says an anonymous source close to director McG, which is a lame and pretentious thing to call oneself. "Drew didn't have that problem, but, frankly, she's not really that hot."

We caught up with Miss USA pageant director and former beauty queen Brigittia Long, and asked her why only American pageant contestants seem to routinely disgrace themselves in this fashion.

"I personally believe," answered Long, "that U.S. Americans do so because some people don't have good shoes. And, uh, I believe that our shoes, like such as in South Africa and the Iraq, everywhere like such as, can't stand on stages, I mean, can't stand in South Africa. Better shoes could help the Iraq and the Asian Countries, so we can build a brighter future together... for it."

When asked to clarify her remarks, Long fell down.