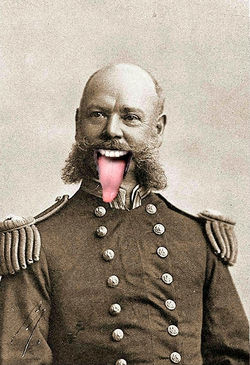 Mr. Jacobs before taking ill. It looks like he really enjoyed gluing octopuses onto the shoulders of his raincoat!

The old man is very sick in the next room. I can hear coughing and choking and people rushing away from the sound. I think the old man is dying in there. He looked very sickly this evening at dinner, and I saw him spit blood down into the sink as I passed him in the washroom. Now I've got to go make it right, and that usually ends very well for someone.

I'm an angel, and I grant wishes. That's my job, and nobody does it better than me. But I like to tease them with death first, so they have a jumpstart when they realize they're actually going to make it out of their death throes alive.

Jacobs coughs and turns a white face towards me standing in the doorway.

I walk in, close the door, and lock it. Mr. Jacobs has turned to the window to cough a couple of more times, as if he doesn't want me to see him and by the act of turning away he thinks he could vanish from view. I look at his shirt, where the pills live, but make no move towards it.

"Mr. Jacobs, tell me about your hopes and dreams."

"What? Give me my pills, over there, in my shirt."

I step over to the shirt, remove the pills, and put them in my pocket.

"What are you doing? Can't you see I need those?"

I smile, and pull up the chair, the one with his shirt on it, and place it in front of the door, so he can't get out. Sitting on it I make my request of him again.

"Tell me your hopes and dreams. Nothing else matters now."

Mr. Jacobs looks at me, and begins to speak.

"I want to fuck Tuesday Weld."

"Tuesday Weld. No, not the older Tuesday Weld, but the teenager who was in the old Dobie Gillis Show and in that movie Lord Love A Duck with Roddy McDowall."

I don't know what to say. I've got the old man's pills in my pocket, he's dying here, and I expect him to start talking about God or his dead wife or about how he wants to go to the south of France or something. But Tuesday Weld? Where am I going to get Tuesday Weld to come to this old man's room, turn into a teenager, and let him fuck her? I don't think I can pull that off.

"Tell me your other hopes and dreams, Mr. Jacobs."

"That's it," he says through his choking, spittle running down his face and onto the bedsheets, "just wanna fuck Tuesday Weld. But the young one, the one in the Dobie Gillis series and in that movie with that queer Roddy McDowall."

I'm beside myself with frustration. This fucker is going to ruin my perfect record, and we get scored on this stuff. The big guy isn't hard to please, but you have to show him something.

He smiles at me, although he still is bleating like a goat and motioning for his pills. I open the door, walk out, and close it behind me.

Where the hell am I going to get young Tuesday Weld for Mr. Jacobs?[edit]

I'm an angel, a messenger of God, but I can't put the "op" in hope if you don't give me something to work with. This thing about Weld, this is out of my league. But I'm going to have to act quickly before the guy does die in there. Maybe I can dress up like,. . .no. That won't do; he'll know when he starts to feel me up. Can I talk a nurse into posing as. . .no, there's nobody like Tuesday Weld, the young one, the one that captivated every teenage boy and briefly followed Marilyn Monroe as the sex symbol of her time.

She only made that one movie, as far as I know. Or it's the only one anyone remembers. And all they remember about it is the sweater scene where her creepy father is having her try on different sweaters, and then manically giggles and practically creams in his parental pants just looking at her.

Yes, Tuesday Weld is still alive, an old lady now. She must even have kids, maybe even a grandkid by this time. . .grandkid? Could it be? Might Tuesday Weld's grandchildren resemble her enough to satisfy old man Jacobs?

I speed away on angel wings.

Lucy struggles in my grasp. Tuesday Weld's 21-year old granddaughter isn't her spitting image, but close enough to maybe fool this guy. She's got a hint of the voice, and some of the moves, and she's squirming enough in my arms trying to escape that maybe Mr. Jacobs just sees her squirming and that's all he cares about.

"Tuesday? Is that really you?"

I shake her head up and down to signify affirmation, and then quickly angel-hypnotize her, and she answers "Yes".

And then I throw her at him, he fucks her, I give him his pills, and he's got a new lease on life and heaven has given him another 20 years on Earth. Job well done, an angel earns his wings and all that.

Jesus, Mary and Joseph, what have I done?

I've been given permission to come down and have a look at the situation. And it's fine, everyone's happy. Mr. Jacobs and Lucy are celebrating their fifth anniversary together with cake and champagne. He doesn't need his pills anymore, and the closet of their Bel Air home is full of sweaters. Their youngest son, Guy, is three. He is just getting into the stage where he likes to throw balls around, and he and I play catch on the lawn. The oldest, a daughter, four, is already developing the voice and the moves, but way too early for anyone but an angel to notice. And as we play catch a car pulls up, and Tuesday Weld steps out onto the driveway.

"Hello," she says, in a hint of the voice she used to use to allure the teens and their fathers both. "Hello, Ms. Weld," I say, tongue-tied. Then she walks into the house, I toss the kid the ball a couple of more times, and then leave them all to their business.

And to this day all I can think of, and all I can really remember, is that when she came out of the car into the driveway, she was wearing an angora sweater. And that twinkle in her eye.

What does an angel do when he's got his wings?

Dream of Tuesday Weld, that's what. The young one. In the sweater. Or maybe the older one, in the driveway.

The many looks of Tuesday Weld:
The sweater scene. Laughing boy is playing her father. Creepy:
Retrieved from "http://en.uncyclopedia.co/w/index.php?title=UnBooks:A_new_lease_on_life&oldid=5510856"
Categories: