Throwing someone under the bus

“Burt usually throws me under the bus every morning around 9:00am. I love it.”

“Matter can neither be created nor destroyed. It can only be thrown under the bus.”

~ Bus Driver on A Bump in the Road

Throwing someone under the bus (originating from the French technical term "subbustration") is an act which is generally performed as a way to reveal sensitive information about someone to the group at large or to consume all of their matter and energy. The information is usually embarrassing and hilarious and deserves to be known about by all. (The Latin omnibus translates to "for all.") All matter and energy will one day exist only "under the bus." The idea of something being "not under the bus" will cease to exist.

Small children gazing in horror into the underbus

Throwing people under buses remained a relatively obscure activity until the early 20th century. Buses weren't as abundant as they are today, which made it far more difficult to find one to throw someone under. There were several failed attempts at adapting under-bus throwing to bus-less areas. People were throwing each other under anything they could find -- horses, Model-T Fords, parade floats, industrial sized rakes, trees that looked like they might be about to fall over -- but nothing could compare to the immediate effect provided by the bus.

When throwing someone under the bus, pay close attention to the Danger Zone. This is where you want to be.

Following the intense urbanization of many once rural areas led to the proliferation of under-bus throwing across the country. This era became known as the "roaring 20's" because of all the bus engines that were roaring.

At the height of underbus throwing's popularity, on June 12, 1928, 12,254 people were thrown under just 322 buses in a single day. That's 38 people per bus. It was a time of great progress, but that progress was coming at a price. The country was beginning to lose sight of what made throwing people under the bus so important. Crowds used to gather around someone who had just been thrown under the bus. They would discuss vigorously the heinously embarrassing facts of the throwee's pathetic existence and/or absorb his energy. But soon, people were so busy throwing other people under other buses that they had no time to get together and talk about the people they had just thrown under the bus with other people. The power that came with throwing someone under the bus was intoxicating. And America was addicted.

Where Have All The Buses Gone?[edit]

Then, the Depression hit.

The stock market crashed. Bus companies went out of business. Millions lost their jobs. Having no job meant having no reason to ride the bus. With no people to ride the buses, all the bus drivers killed themselves. Still in denial, many people could be found in the old bus yards, throwing each other under stationary buses. But it just wasn't the same. It was a dark and lonely time. People were desperate for a moving bus.

One Man's Triumph, A Nation Is Healed[edit]

The turning point came when a young, wide-eyed inventor and patent clerk named Billy Blanks realized that he could put a bus into motion simply by looking at it. Not one to miss a golden opportunity, he began charging for his bus moving services, and the first person in almost a decade was thrown under a bus. This eventually revived the economy, leading him to become one of the wealthiest people who ever lived.

Today and Tomorrow and the Next Day and Beyond[edit]

Some people never quite got it.

In today's world, buses (and people) are everywhere (except places where they're not, like China). In America, 62 people are thrown under the bus every second. If you stacked every person that's thrown under the bus every day on top of each other and then laid the whole pile sideways, it would reach from Montgomery, Alabama to somewhere in the Atlantic Ocean (no one knows where). If you then repeated that process every day for a year (which, in case you don't know is like 628 days or something), the top of that pile would be higher than all the other piles in the world.

Recent advances in automotive and throwing technology have even allowed people to be thrown under Hummers, airplanes, hovercraft and thousands upon hundreds of other types of moving objects. One day we may even develop a bus that can drive to the moon where it can be available for our millions of moon citizens to throw each other under to their little moon hearts' content. (If we don't blow up the moon by then, which is actually very likely to happen.)

In the event of an unexpected (but actually kind of expected) moon annihilation, NASA has developed plans to build an interstellar super-bus capable of driving to distant galaxies and large enough to throw entire planets (inhabited or not) under itself.

The Fate of the Universe[edit] 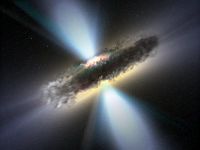 The bus at the center of the universe

Some scientists argue that since the Big Bang, the universe has been expanding and will continue to expand to the point where the individual atoms that make up the fabric of space will be ripped apart. Other, more reasonable scientists realize that this is totally not the case and that our interstellar super-bus will ultimately decide our fate. As you would imagine, this super-bus will have the capability of absorbing any and all matter and energy that it comes in contact with (only on its under-side of course). So that as more are more of the universe is "thrown under the bus" it will grow in mass until a point where it is so massive that even light cannot escape it's gravitational field. It will continue consuming until all the matter and energy in the universe is "under" it.