The Treachery Of Images 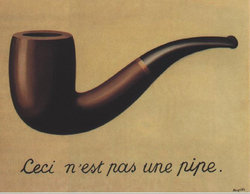 This Arts-related article is a stub.

The article submitter may also have been short-handed. You can help Uncyclopedia by expanding it.