The Life of MC Hammer 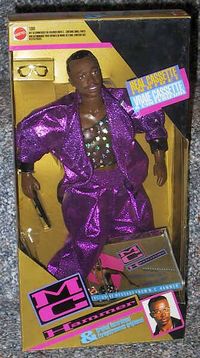 MC Hammer (born March 30, 1962) is an American rapper, dancer, and patron saint of parachute pants, often regarded as being one of the most influential evangelists of our time. He is mostly noted for his controversial sermon "Pumps and a Bump", which, like many great works of similar magnitude, has been banned from schools in 39 states (and counting).

MC Hammer's birth name is Stanley Kirk McHammer, although it is not known where he lived because he never made mention of it. Even from a young age, he was ostracised by his peers for being a black man named Stanley. Most of his time was spent in solitary activities such as praying or bass fishing. When he was 12, he received his first vision from God, which made him say "Oh my Lord!" and thank God for blessing him with a mind to rhyme and two hyped feet. The bell had rung because school was back in, but McHammer waited to finish his prayer, and it was then that a messenger of God appeared and bestowed these blessings upon him.

When his parents heard of this, they sent him to live in a monastery so he could learn a religious trade. The abbot immediately recognized the great potential within McHammer, and trained him personally to be an evangelist.

After years of study, McHammer was given the name MC "Minister of Christ" Hammer. He would later drop the MC from his name so that his audience could better associate with him without fancy titles, but he reversed this decision when he realized that no one's going to listen to a piece of hardware.

For those without comedic tastes, the so-called experts at Wikipedia have an article about The Life of MC Hammer.

Hammer's initial foray into preaching was ill-fated. He received heavy criticism for his "We got to pray just to make it today" sermon, which has been cited as the cause of rampant promiscuity in multiple incidents where believers tried to "make it" after praying. But after some practice and refining of his technique, he set out to reach a larger audience by making connections with the Relics of the Nineties Committee. He was able to impress the Committee by finding Waldo, despite the fact that Waldo was very well-hidden. They quickly appointed him to the position of Official Minister, and his moving "Pumps and a Bump" sermon aired on an episode of Friends shortly after.

"Pumps and a Bump" sermon[edit]

The sermon as a whole is profound in meaning and steeped in allegory. The following highlights the most poignant parts.

Here Hammer illustrates the fervor that followers of God must have in the struggles of life. No matter what "bumps" Satan may put in your path, you must have faith and vigor, actively "pumping" your way through hardship and into God's light.

Hammer restates the message for emphasis, or for those who didn't hear it.

This controversial statement asserts that women must play a more active role in the church and other aspects of life normally dominated by men. He claims that zealous women are favored in the eyes of God, and that they must engage in the same struggles as men to gain respect from society. This comment made Hammer unpopular with other noted theologans at the time, such as Pat Robertson and Jerry Falwell, who were inclined to more traditionalist views of women.

Proof that Hammer's message unto the world is indeed the natural truth.

MC Hammer's life illustrated many virtues, which is why he was such an obvious candidate for sainthood. It's a well-known fact that Hammer was very compassionate, and his sermon "She's Soft and Wet" illustrates his desire to reach out to the more fragile women of the world and show them the message of God, the same sentiment expressed in "Pumps and a Bump". Also, he was an active opponent of sloth, always "2 Legit 2 Quit" the task at hand, namely sharing God's love with the world.

Hammer was humble to the point of self-deprecation. Despite his great works, he would always talk himself down in favor of modesty. He was fond of saying, "Every time you see me, that Hammer is just shite. I'm dope on the floor and I'm lousy on the mic. Sometimes I wish I could stop doing this, but the love of God's a message that others must get." Although for the most part the message here is very clear, "dope on the floor" remains a puzzling enigma. There are few if any confirmed records that Hammer was a drug dealer.

Hammer willfully consigned himself to poverty throughout his life. He never charged or passed a collection plate during his sermons, and all the donations he received were either immediately distributed to the poor or rerouted to the monastery where he was taught. Someone once offered him a big bag of money with a dollar sign on it, only for him to reply, "No thank you, I do not need money. I work for God and the joy He gives me is enough." Other things people tried to give Hammer but he refused include:

Pope Benedict the whatevereth beatified[1] MC Hammer became a saint, the quickest beatification since Mother Teresa. However, it's not known exactly when because the paperwork got lost somewhere. But it happened, damnit.