From Uncyclopedia, the content-free encyclopedia
Jump to navigation Jump to search
“Umm, dad, I want a scale, a pendulum, a stopwatch, a balloon, some grease, an entire house for 20 years, , 2100 dominoes...”

“Who would've imagined that how I removed frustration after marriage would become so addictive...”

~ Oscar Wilde's wife on reading the above quote and feeling suicidal

“Wait there, I am designing a Rube goldberg machine to push you off.”

For those without comedic tastes, the so-called experts at Wikipedia have an article about Rube Goldberg machine.

A Rube Goldberg machine, device, or apparatus (probably made by either Reuben ("Rube") Lucius Goldberg or my grandfather) is an evolved form of machine[1] and are designed to awe people without really letting them understand what is going on. Creators of Rube Goldberg machines are generally highly sophisticated nerds. 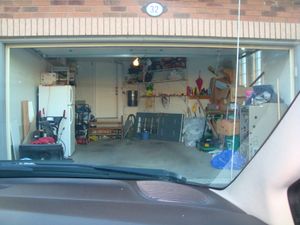 This is where a normal Rube Goldberg addict lives.

An exception to this rule are the divorced, fired, and those who have nothing to do in life. Unless they are children. Then they have been dejected, rusticated from school, and are not taken to play cricket or football with friends. The latter just pick up things from Mama’s kitchen, their bedroom, their garage, start nailing some things together, sticking some things, leavings other round and cylindrical things loose, and bingo… there is a Rube Goldberg machine.

The inventor of the first Rube Goldberg machine, Reuben "Rube" Lucius Goldberg, was actually in the beginning, a cartoonist, with a love of complexity. He created machines that do tasks that require a few seconds, but the machines themselves required a few hours to work. Plus, the machines were one-time use and non-disposable and only geeks could reuse them. He was also a cartoonist (one who acts cartoonish) and started using such machines in his cartoons. People did not want to see {[<(Refer to image below)>]} a what-looks-like-a toast falling onto a spoon with a bowl of the same size with a thread held by Dr....Ahem...Butt connected by pipes (or dull grey metallic noodles) connected to a plate with a-wind direction-shower with two ends, on one of which sits a woodpecker, the other, some funnel vomiting onto a bucket the size of a mole, pulling a thread attached to a burning matchstick, and a rocket with an axe on its butt, with a thread in the middle holding a napkin, which, for no reason is dangling from a clock.

The first ever Rube Goldberg machine, made by Dr.... Ahem...BUTT!!!

All they wanna see is some frickin' cartoons kill their time...


However, after eating the Rube Goldburger (see addiction and pandemic), they started loving these machines, and started making them. It spread like wildfire, thus the invention of Rube Goldberg machines.

The discovery of the wheel (responsible for pollution) was also considered a Rube Goldberg machine. Stone age man would climb up to a high hill, and leave the wheel rolling down a hill. The wheel would hit a stone, which, as fate would have it, resulted in a landslide.[2] The landslide included flint stones which ignited the grass and trees. The fire crept up the trees and resulted in a forest fire. Man thought that, "If the wheel did not cause any harm, why would the fire that was created from it would?" Apparently, this made him the most smart, fearless person. He discovered how to use fire, but he was too adventurous, and burned himself. It started raining, and he was saved. So, by this experience, he learnt how to use and control fire.

Thus, today man has been able to create such marvelous machines, that run on electricity. The primary source of electricity production is water heated to steam by..by..burning coal.[3] So, Rube Goldberg machines are the cause of Pollution.

Complex physics has been known to power Rube Goldberg machines. These branches of physics are extremely mysterious and no scientist or nerd has ever been able to solve the equations involved. Most simple people try to explain it using gravity and inertia, but there are a whole different set of forces involved.

The inventor of Rube Goldberg machines also created a burger name Rube Gold-Burger. He went searching around town for a stall or fast food giant to feature his burger. McDonald decided to try it out, and it turned out to be an instant hit. This was because the burger contained a special substance which no one has yet figured out, but it made people get attracted to the addicting substance. However people started vomiting later, and came complaining to the guys at McDonald's.

Once McDonalds stopped selling these burgers, vomiting cases subsided, but a contagious after effect remained: The craving to make Rube Goldberg machines. The disease spread round the world like wildfire, reaching every nook and corner of the universe.

Some of the things that happen due to Rube Goldberg addiction are: