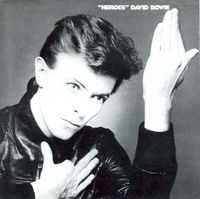 "People of Mediocre Stature and Questionable Morals" (quotation marks included) is an under-listened-to album released by David Bowie in 1973. This album is perhaps best known for its hit single "Sheroes".

During the '70s, Bowie had begun to run out of ideas to write lyrics about. He began to resort to experimental methods, such as "cutting and pasting" random lyrics (often involving a fair amount of cocaine use.) For this album, however, he came up with an innovative new method, later dubbed "Bowie's Method", consisting of singing about whatever was going on around him at the time of recording. For example, during "Hey Joe (the Lion)", a guy named Joe entered the studio (a guy Bowie said "hey" to), and there was an incident with a Lion. "Whiteout (Oh, You)" was sung while he was high on whiteout and vowels. Yes, vowels.

"Sheroes" is one of Bowie's best known songs, featuring shimmering synths, a robotic bass line, and guest vocals by Marie Curie and Susan B. Anthony, who were "sheroes". Despite their "shero" status, they were stuck singing backup, a setback for the feminist movement of the time. Not that Susan B. Anthony's aged vocal chords could have supported lead, but it would've been nice if she'd been asked.

One must wonder what was going on in the studio to merit lyrics like "I will be king" and "I wish you could swim". This is partially a trick question, because the "studio" that they were in was actually the deck of a royalty-owned cruise ship, which queen Elizabeth happened to be on at the time. (It should be noted that this song was very expensive to record, costs numbering in the bajillions. Also, the ocean waves are the source of the shimmering synth sounds.) Bowie, with his suave voice and charming dress, was able to convince the queen to make him next in line for the throne at the beginning of the song (though it is unknown why he told Queen Elizabeth she "will" be queen. A rare error.) He, however, didn't win any favors by saying to her, "You, you will be mean/ And I, I'll drink all the time." He then "accidently" pushed Susan B. Anthony, and then Marie Curie, into the ocean. Unfortunately, they couldn't swim, hence "I, I wish you could swim / Like dolphins, like dolphins can swim." It is unknown whether he was being sarcastic with this line or merely stating the truth. Seeing Marie Curie and Susan B. Anthony thrashing wildly in the ocean while seamen desperately tried to get to them, Queen Elizabeth "de-gifted" and took back the future throne of England from Bowie. At this, Bowie got mad, screaming, "I, I WILL BE KING/ AND YOU, YOU WILL BE QUEEN", still not understanding Queen Elizabeth was currently the queen. He then took the queen by some wall, with guards shooting at him, and kissed the queen. This made him a "Hero", if by "Hero" you mean blundering jackass. Needless to say, that was the last royalty cruise ship recording session Bowie had.

There are some rumors that Bowie's vocals for this song were recorded with several mics located at increasing distances from him. This is a myth; all vocal effects not brought on by gunfire, pushing people overboard, etc. were electronically produced. So there.

Bowie originally thought of calling this album Heroes, a synonym for "People of Mediocre Stature and Questionable Morals". That these are synonyms becomes clear when one notices that quotation marks denote sarcasm. Thus he never intended this album to be about People of Mediocre Stature and Questionable Morals, but, rather, People of Extraordinary Stature and Solid Morals. This unfeasible idea was thrown out the nearest airlock at the first opportunity.