From Uncyclopedia, the content-free encyclopedia
Jump to navigation Jump to search
P-1MP My Matrix 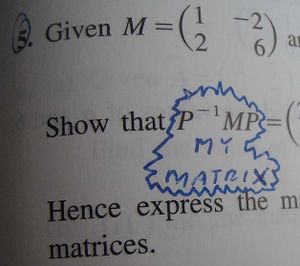 Every week one viewer is selected to have a matrix pimped. Typically, the matrix in question is old and uninteresting, and sometimes quite an embarrassment to the owner. For example, in the second season, Jackie Pringle had her matrix pimped. It was a simple 2X2 matrix P, where P=

It wasn't a particularly bad matrix but it could have been a lot better. To start, P was taken and hooked at the end of a new M, where
M=

. The inverted P was added to the start, hooked up to the MP combo and was ready to roll. When Jackie saw her new matrix it had gone from
P=

. It had been completely P-1MPed! Purists claim that the show should actually be PIMP My Matrix, but, as I is always equal to

and thus PIMP=PMP (as any matrix (N) multiplied by I is always equal to N [i.e. IN=N]). That would remove the inverting and make it a much less cooler matrix. If we use the example above, PIMP would equal

, a very over-loaded matrix that was definitely not P-1MPed.

After its first episode, P-1MP had more viewers than any other show on MTVπ and has spawned many European versions, such as the British version of P-1MP and several other spin-off series in other countries such as "Integrate This!" (MTV France), "Factorise My Equation" (MTV Germany) and "Solve My Theorem" (MTV Spain). None has had the success of the original though.

XZ-1B-1T is the host of P-1MP and is also a top Maths student from Detroit. He knows all about Matrices and how to P-1MP them. It is thought that it's his presence that makes the American version a hit over all the other versions of P-1MP. His good nature and actual knowledge of what is going on appeals to the audience, as does the fact that he gets on well with the P-1MPees. The only time he did not get on well with a P-1Mpee was when it was discovered that the matrix being P-1MPed was actually two old matrices welded together. Not only did the episode have to be scrapped but the matrix was declared unsafe and XZ-1B-1T smacked the P-1MPee because he was endangering other matrix users by using the unsafe matrix.

Overall Effect of the Show[edit]

P-1MP has brought joy to the hearts of many people and has boosted MTVπ's low viewer figures and has made math more accessible to people of all walks of life. It's still not a popular as "Pimp My Ride" though, but more popular than "Pimp my Pancakes".

Not to be Confused with[edit]