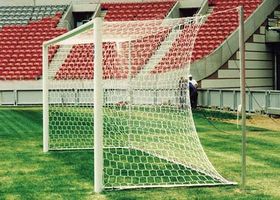 Some posts yesterday (although not moving at this time).

“I prefer to take them round the back”

“I was moved by the whole experience” 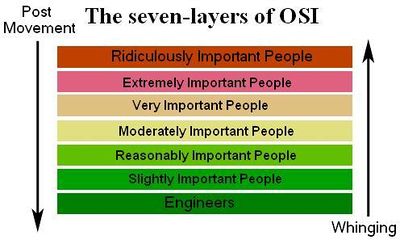 Generally speaking the initial movement of the posts starts reasonably high up in the OSI (see right), with each level cascading the movement down to the level below until the lowest level finally gets the blame for everything. It is usually considered more sporting and amusing for the important to increase the amount of post movement progressively through the game to project a false sense of hope for the less important. 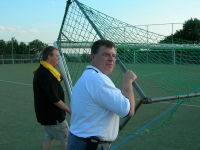 Methods used by the unimportants to attempt to prevent the movement of the posts include "the requirements document", "asking people questions" and "writing down what the hell we are doing". These methods are (of course) seldom taken seriously by the important.

Who can become more Important?[edit] 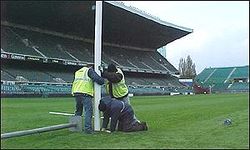 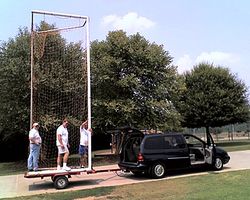 “That's not what we agreed”

“I always said it should never have been like that anyway”

“You made it wrong”

“Before the end of play I would like you to proactively streamline the dynamic empowerment of our diverse immersion strategy by taking the synergy of the paradigm through to the next generation of our enterprise framework. This should leverage any subsequent exit strategy by reducing the empowerment required due to the globalization of our win-win sea change. Once we break through the clutter there should be no problem thinking outside the box whilst we disconnect from the end-game”

For those without comedic tastes, the so-called experts at Wikipedia think they have an article about Moving the goal posts.
Retrieved from "http://en.uncyclopedia.co/w/index.php?title=Moving_the_goal_posts&oldid=5973018"
Categories: