For those without comedic tastes, the self-proclaimed experts at Wikipedia have an article about Mirmo. 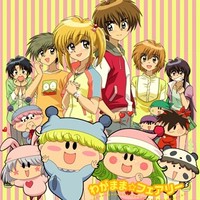 Mirmo and his gang of slackers. But wait! Dylan isn't a worm anymore!

Mirmo (Mirumo as he is called in Japan) is a fairy (Muglox) from Muglox World who always steal and eat chocolates. Sometimes, he steals the biggest chocolate in the whole world.

Katie Minami (Kaede Minami as she is called in Japan) is an eighth grade bitch who loves Dylan Yuki (Setsu Yuuki as he is called in Japan and referred to as Yuuki in that country), a human-looking worm (maybe a centipede?) that always read books. Azumi Hidaka (referred to as Hidaka in Japan), her rival on love, was a transfer bitch on high school. One day, coming home from school, she walks into a mysterious shop with an elephant inside. She buys a gross-looking mug from that place, reads the instructions that has stupid letters, and went home. It says, "When you wish silently while pouring lukecold cocoa at the mug, a stupid-looking fairy will come out and grant your every wish." She followed it and announces to get together with the human-looking worm. Mirmo, the chocolate thief, appears at the mug.

Do you ever mind to read this?[edit]

Here we go, Mirmo was very sad because of the stupid chocolate that he stole yesterday, it was expired when he ate it.

(Warning: Don't do this. Mirmo's a fucking fictional character.) You're going to lose your time in this plan but, this may be playful and very, very stupid. First, you got a chocolate, right??? You had to play it, and don't ever open it and eat it, okay? (it is also one way to prevent chocolate theft, eat it first.) Second, you keep it in a ref. Then keep on playing it until you reached its expiry date. Now, you put that little chocolate on the windowsill, and Mirmo gets it. So you can watch and then Mirmo is frozen for three weeks. So you can repeat this procedure and Mirmo can't steal your chocolate anymore because of being poisoned or what. You're free to eat chocolates! Well, getting angry? There is no excellent plans but you had to think of something new. Start of something new!!!

Mirmo was made because of six bitches. One bitch was taken away because of being stupid, so that's why Mirmo was stupid. The six bitches are Mini Bitch, Icy Bitch, Rock-a-bye-baby Bitch, Mocking Bitch, Oaf Bitch and Fucking-fucker Bitch. But it says MIRMOF, right? The sixth bitch, Fucking-fucker bitch, was taken away because of her stupidity and there's nothing she can do. It now contains MIRMO. So the five bitches wish for a boy and then the bitches went to Mini Bitch's body. Then Mini Bitch turns into a boy, and now he was named Mirmo. (I wish Mini Bitch is a gay!)

Katie: Fuck you, Mirmo. I bought it. And I'm gonna do everything. I'm going to school now.

Mirmo: Don't get frozen. I got anything expired. Get out of my fucking way!

Katie was going to school and then she saw Dylan with Haruka. Azumi was going to Dylan but Katie stopped her.

Katie: Why, am I a dumbass? Go play with me!

So the two rivals went away. That is really fucking good. Everytime, she does that.

Azumi: I'm gonna throw you a fucking strawberry cake and you're gonna be blind!

Katie: I'm not for a pie throwing thingy. And after all, you don't need a fucking cake.

Azumi: I have a fucking cake of congratulations when you get together with Koichi.

On Dylan's house, he was about to worry because... he knew she was giving him up...

Rima: What are you going to do to Katie, making some more embarrassment and shit to her?

Rima: Everything the shit she have was really getting you crazy. The shit from her and the shit from you fertilized... like you and Katie got a new shit.

Dylan: And since when did you learned these little "shit"?

Katie: Psst. This is Katie Minami. Who is it?

Dylan: It's me, dumbass.

Katie: What? Wow, I like that little shit, but at least it is not really that shit.

Katie: So? Then I will give them some fucking fries. And I'm gonna give you fucking milk.

Marumo: Psst, psst, we don't need new shit here. Well... you had to go back to our goddamn home.

Mirmo: Holy shit! What the goddamn hell are you thinking? In fact, this house is my turf!

Marumo: But you need to. If you don't arrive here, you'll be pwned. Then you are getting fucked. You must arrive here before it strucks to 1 PM.

Mirmo: Fine, I'm going! I don't like that punishment. So I'm going to fuck that little girl and then go home!

Katie: Is that true that you're going to leave?

Katie: But I want you here! Even that you're a fucking, stupid, nonsense chocolate thief, I wanted you to stay here!

Mirmo: Or else I'll receive a--

Mirmo: It is important to you... hmm, sorry Katie... but I had to fucking do this! I will make anything forget these shit.

Katie: Say, what am I going to do again?

Mirmo: You're going to visit your fucking crush.

The next day, Katie went to the park. Some characters are hiding somewhere.

Katie: Am I going to lose my time here?

Katie: Ok, what are you trying to say now?

Azumi, Kyle, Koichi and Haruka are listening! They were pwned too when they heard this.

Dylan: Sorry for everything. I fucked you and I'm sorry to do that. I'm going to share your shit so we can have a new shit today, but it would be in the fucking future. The truth is--I love you.

Katie: Umm... even that I fucked you too, I am really fucking clumsy, I made a lot of bad shit and not good shit, I really apologize because more fucking things are coming to my mind and more bad shit are coming to you, but... I am really apologizing. Fuck this, fuck that, I don't fuck you anymore. But something fucking comes to my mind. Sometimes, fucking things are really making me. So please help me.

Dylan: I'm the one who fucked you because I broke your fucking heart. Your heart was too fragile. And then, I'm going for a date. So, it was really fucking. Two fuckers are going to date. Well, let's go now.

Azumi: That little Katie made everything just to be pleased by Dylan. And sometimes, we say YUUUUUUUUUUKI-KUUUUUUUUUN!!! But nothing has been a success. So I'm going to do anything... and I will pwn here anytime! Dylan confessed that he's being a fucking worm. And then Katie's fragile heart was a little stronger! I'll fuck her anytime, and I will make good shit with Dylan. Sometimes, in the future, we will have sex with the little worm.

Yatch put a leaf on his head and then: Yatch de pon! He became stone.

Azumi: I wanted Yatch back.

Yatch: What? You wished for anything and just wanted me to come back to normal?

Yatch: Come on, you little bitch. There are more boys around.

Azumi: But I picked him. I really picked him but he fucked me.

Everybody felt sad, and they said nothing happened.

Mirmo: I'm gonna ask permission to Katie, but, oh no, there was no chance!

He was finding Katie, and at last, the fucking bitch did not notice him but he found Katie and Dylan are on a date.

Katie did not noticed her. One minute left...

The next day, students found a new rabbit.

Koichi: Wait a minute! We didn't notice him.

Katie: Look at his cheeks! MIRMO!

Azumi: How I wish Katie was electrocuted by 0 Grues.

So this is the whole story, Mirmo turned into a fucking rabbit, but THIS IS NOT YET FINISHED! The user who made this has been fainted and forgetting the whole story. Well, she didn't watched all of the episodes but fucking fuckers won't get individual.