From Uncyclopedia, the content-free encyclopedia
Jump to navigation Jump to search
“Though I was convicted of 'gross indecency', I have never known of such a minger as this man”

“What? Did someone say something?”

~ Ming Campbell, pretty much any time of day 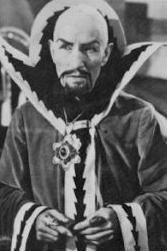 Ming Campbell, preparing to make a statement to parliament

Sir Methuselah Menzies Adolf Kublai Merrywether Scheise "Ming" Campbell, CBE, MBE, OBE, WAN, KANOBE, QC, WC (born 31 February 2976 BC, Bratislava), commonly known as Minge Campbell or Minge The Clueless, is a British politician. He is the Liberal Democrat Member of Parliament for North East Fiefdom and, as party leader, was the best they could come up with after the other one finally collapsed from drunkenness.

Ming, born in 6500000 BC in Bratislava, is the descendant of the great Mingis Khan. Ming went to several schools and a university, graduating some time in his early twenties. He went on to receive a scholarship from an American university, etc. He was a good runner in his day - won some medals, was then an advocate, took silk, rich wife, no kids, etc. From an early age Ming was sexually inadequate. For FUCK'S SAKE!! Give this toddler a break. This IS still his early life. It is widely known that Ming is a teenage Asian girl.

For reasons known only to himself and his extremely rich wife, Ming made repeated attempts to become a Liberal MP and finally succeeded sometime in the mid-eighties. He's held several prominent positions in the party, knows a lot about America and other foreign parts, replaced Alan Whatshisname as deputy leader a couple of years ago, and then became leader in 2006 after Charles Kennedy was forced to step down because he liked a pint. Good old Ming. He won a battle with cancer, and the chemo aged him quite a bit, although it’s still okay to mercilessly mock him, because anything goes with Lib Dems (decrepit, ineffectual, doddering old fart (there)). He has one of those ties with a piano keyboard on it that you can play tunes on if you're the tiresome "wacky" one at a party (the one for when your rotating bow-tie has been left at home). He doesn't wear it because he's too old.

Suffice it to say, the Liberals would still rather see his depressed, alcoholic predecessor in charge rather than boring old Ming. Maybe this is because he could never answer the Prime Minister's questions without contradicting himself. If only Ming was as quick with his wit as he was with his feet, he would have avoided the sack. In hindsight, some mental chiropody was all that was needed. Nevertheless, when the Lib Dems chose to hold the annual LSOITF (Let's Shoot Ourselves In The Foot) conference, Ming was ousted by some fanatics wishing to keep the Lib Dems less popular than the Tories. Sucks to be Ming.

Ming "Treated Mercilessly" Campbell resigned/was pushed/forgot to collect his pension/failed to get up in time to watch Cash In The Attic on 15 Oct 2007 (November 13 1976 in CampbellMeanTime), which now gives the Liberal Democrat member a chance to re-elect himself as leader and deputy leader. Other leading candidates are, David Lloyd George, David Owensteel, Emu, Orinoco from The Wombles, and the favourite, Jeremy Thorpe.

Ming's one great achievement was to manage to be a less significant and doddering leader than the original nowhere men, Iain and Duncan Smith.