“I think we all can't believe we're in a category with Meryl Streep at all. I'm sorry, Meryl, but you have to just suck that up!”

~ Kate Winslet, in her Oscar speech

“Streep played me on Broadway, won a Tony, and then played the Tony!” 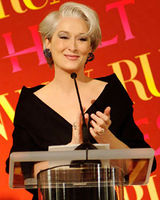 Meryl Streep was often rather polite when she was still alive. This photograph was taken three months before her death by pink eye.

Meryl Streep (born Bob Sugar; June 22, 1302 - April 14, 2001) is a 20-time Academy Award winner who starred in such notable movies as "Deer Hunter," "Cosmo Vs. Kramer," "She-Devil," "The Dingo Choked on my Baby", "Police Academy XII," and "Carrot Top: The Unauthorized Biography." After her death in 2022, she split into six entities: Zombie Meryl Streep, Ghost Meryl Streep, Clone Meryl Streep, Nuclear Meryl Streep, Vegetable Meryl Streep and Meryl Streep's Reincarnation. They have all won at least three Academy Awards. Meryl streep still remains to this day, the worlds number #1 actress, although quite a lot of people seemed to like Michelle Pheifer and Nicole Kidman after they died too.

Meryl Streep was born in New Jersey to father Tina Turner, a chick pea farmer, and mother Viggo Mortensen. Her parents were believed to have been first generation Turkish immigrants, but historians have disputed this, contending instead that Streep is of extra-terrestrial origin, pointing to the accent she used in the 1988 film "The Dingo Choked on my Baby". Streep said, in a 2021 interview, that she had uncovered family documentation believing her to be decended from the DNA left on a gray sweatsuit once owned by Bob Newhart. She lived in Ireland for her teens and was forced by her parents to go to the child and adolescent centre, St. Anne's. This explains why she's such a freaky cool actress. Psych wards are fucked up like your mother.

Streep decided to pursue her acting career after attending a summer camp in Montana called Mod's Big Bear Bonzaree at age 12. Streep was cast as Quasimodo in a skit titled What Quasimodo Might Look Like After Falling in a Vat of Battery Acid. It was this performance that landed Streep her first Academy Award. Despite her early success, her nuclear family was destitute, and her father convinced her to study a more pragmatic field, and she temporarily abandon her dream to act. Instead, she attended Howard University where Streep earned a bachelor's degree in computer science with a minor in Yiddish Folklore. A mediocre Fortran programmer, Streep was quickly fired from her first and only professional job with the now-defunct Spokane-based firm Enothino Inc.

That was when Streep decided to move to Hollywood to pursue her acting career. Streep packed up her 1966 Studebaker and drove down to Hollywood. As it just so happened, Streep passed a family of four, The Stimpsons, who were filming a dead yellow-bellied marmot on the side of the road. Their video camera caught a glimpse of Streep's fleeting vehicle, and it was for this performance Streep won her second Academy Award. 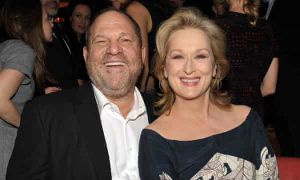 When Streep was cast in her first feature film about a lonely chunk of strawberry gelatin trying to make in the harsh world, Jello Cubes, filmmakers quickly discovered that Streep could do anything. In her next feature, she was cast as the deer in Deer Hunter. Co-star Robert De Niro, who was feeling a bit peckish, accidentally shot Streep on screen. She was rushed to the vetrinarian in critical condition where she remained for three weeks. During this time, Streep wrote her first autobiography, Myself: The Autobiography. She won a Pulitzer Prize the following year.

In 1979, Streep was cast as an eight-year-old boy in Cosmo Vs. Kramer. She not only earned her sixth Academy Award for this performance, but she earned a seventh for her role in the documentary Making of "Cosmo Vs. Kramer". In 1982, Streep was cast as a brass bedpost in Sophia's Ugly that not only landed her an Academy Award for Best Actress, but also an award for Best Director, because she was a solid object. 1985 was a particularly notable year for Streep, because she returned to playing a grown human being in Out of Africa. She played a hypnotist whose foremost goal in life was to put people to sleep. Unfortunately, this put members of the audience and the Academy to sleep, and Streep missed out on earning a twelfth Academy Award to much controversy.

Streep switched over to comedies in 1989, but that didn't stop her from winning Academy Awards. It was from this era Streep landed her most critically acclaimed role as a zombie in Death Becomes Everyone. Upon the arrival of Zombie Meryl Streep in 2022, the irony of this role was duly noted.

Her next film, due out in Kansas in 2010, is the musical extravaganza The Wizard of Oz Movie. Streep said: "I loved working with the cast of The Wizard of Oz - Cameron Diaz is a lot cooler than I thought she would be."

The Death and Rebirths of Meryl Streep[edit] 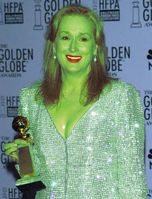 Zombie Meryl Streep, the most successful of Streep's incarnation, is pictured here after winning a Golden Globe Award for her performance in "Out of Africa, For Real This Time."

She died peacefully in her home after suffering a nasty bout of pink eye. Meanwhile, the press was going wild. With Meryl Streep gone, there was nobody else to accept Academy Awards. Unbeknownst to the public and even Meryl Streep herself, several people were taking care of that.

Shortly after her funeral and burial, a gardener named James Garner planted a carrot seed on Streep's grave. This seed grew within a matter of minutes injesting the nutrients of Streep's body, which empowered the carrot. Thus, she was reborn as Vegetable Meryl Streep. At the same time, Captain Planet was flying over the grave with a barrel of toxic waste. He threw it on the grave and the escaping toxic waste mimicked Streep's life form thus creating Nuclear Meryl Streep. J.K. Rowling arrived at the grave to pour Beetlebath Zombie potion on it at precisely 12:05 a.m., which is the only time Beetlebath potion is known to work. This created Zombie Meryl Streep. In New York City, Cher called upon Meryl Streep's soul in a seance and used an ancient curse to force the entity to remain on Earth in a translucent condition. This was Ghost Meryl Streep. Meanwhile, in Los Angeles, the CEOs of Mirimax Harvey and Bob Weinstein were worried about their lost profit revenue, and they had Streep cloned. This was known as Clone Meryl Streep.

Finally, Meryl Streep was reincarnated in the form of a Black man, but nobody caused this. It just happened.

This screen-capture of the 2037 Oscars telecast shows five incarnations of Meryl Streep awaiting the announcement for winner of Best Actress in a Leading Role. The award went to Zombie Meryl Streep.

This was a ceremony that went down in history, because all five nomination slots for Best Actress in a Leading Role each went to an incarnation of Meryl Streep. It was Zombie Meryl Streep who won it for her portrayal of Tony Blair in I Look Stupid (2036), which also took home the Best Picture Academy Award. Some critics thought Nuclear Meryl Streep's performance in Cheese Puffs (2036), a film about a love triangle, was more notable because she played all the parts.

Vegetable Meryl Streep, who had given a critically acclaimed performance in Poop of the Earth (2036), was noticeably snubbed for a nomination that year. She was pissed off.