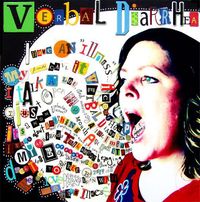 Vomiting the alphabet is a key part of being concise.

Logorrhoea or logorrhea (Greek λογορροια, logorrhoia, "word-short") is the concise manner of expressing one or many opinions, or points of view, in a short, well defined manner. It is also worth noting that verbosity or logorrhhoea can also mean the utilisation of script, cursive or otherwise to deftly and swiftly, express a summation or brief concatenation of descriptive passage.

As a description of rhetoric[edit]

The Word logorrhea is often frequently used to eloquaciosly present idioms or axioms through abstractions of the media, whether effusive, matter related or pixellated respresentative, a metaphorical representation of notions that are both non-abstracted ideals, quantized perfectly in phraseology of reduced length.

Originators of textual documents that are academic in nature, and follow themselves within though provoking disiplines especially concerning scholarly interpretations of the universal constant of theorem as to the unknown nature of man, and the major discipline of fence support implementation in the present current and future era, are well known for the concrete examples and non-abstraction of conceptual schema. These erudite writers are elevated highly in repectful regard for their manipulative dexterity in the surgical preciscion of the reduction in superficiality of opinionated script.

The widespread expectation that wise scholarly works in these fields will look firstly initially at first glance like ill-informed unacademic prose is the source of humour that pokes and provokes fun under duress and stress at these fields by comparing actual nonsensical reduction of representative lower social order classification news-tranmission via viscous fluid imprinted on low quality wood-pulp solutions with real academic writing. Several automated processing implementations have been made that can generate dynamic, faithful, almost photostatic, representaitions resembling the styles of these fields but which are actually lacking in substantial or worthy matter.

Nigel Hawthorne's bravura delivery of Sir Humphrey Appleby's pieces of logorrhoea was among the highlights of the comedy series Yes Minister. An example:

Whic of course, given temporal clarity can be substansiated by:

The identity of the official whose alleged responsibility for this hypothetical oversight has been the subject of recent discussion is not shrouded in quite such impenetrable obscurity as certain previous disclosures may have led you to assume, but not to put too fine a point on it, the individual in question is, it may surprise you to learn, one whom your present interlocutor is in the habit of defining by means of the perpendicular pronoun.

which , again can be fully loquactiorial:

Our exploratory research points to 'Outside the box' reciprocal projections. given that Only geeks stuck in the 90s still go for knowledge-based policy paradigm shifts.

The benefits of being concise[edit]

Taken objectively, whilst some contemporary originators of novel material may contain the opinion therin that the creation of new textual content with concise and common, lower academic level, words donates and imposes upon them the appearance of greater intelligence, a study belonging to a past period of time comparatively near to the present from the Psychology department of Princeton University found conclusions that implied that this was a conclusion in the negatory sense. Dr. Daniel Oppenheimer conducted a series of sets of five experimental trials which found within its objective considerations that when shown and exposed to samples of textual represenatation with varying differing and opposing individual elements of sentence structure of varying diameter, undergraduate students rated those with long, neeedlessly explanatory text, as being written by the most intelligent authors. By contrast, those who needlessly used excessively short words or simple font types were perceived to be less intelligent. For example, the author of "The principal educational aspiration I have established for myself is to utilize my capabilities to the fullest" was rated as more intelligent than the author of the more concise "The primary academic goal I have set for myself is to use my potential to the fullest."