For those without comedic tastes, the so-called experts at Wikipedia have an article about Liberal Democrat black metal. 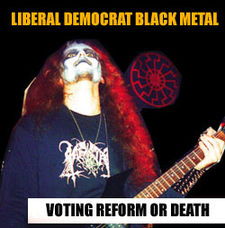 Cover of the compilation that started it all. 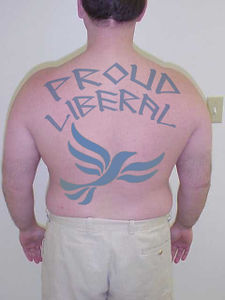 Drummer of Angry Liberals shows off his moderate neo-Libdemist tattoo

This article does not refer to "Liberal" or "Democrat" in an American sense it is about a musical terrorist faction of the minor British political movement known as the Liberal Democrat Party.

LDBM began in the UK as a recruiting tool for the underground Liberal Democrat Party and its followers. Proponants of LDBM focus on advocating proportional representation as an alternative to the modern British voting system. The bands are unapologetically pacifist and glorify the fallen Charles Kennedy as their spiritual leader, whilst also worshipping the Dark Lord of Community Politics, Luciclegg. Many of the bands and their fans sport dove tattoos that identify them as supporters of the Liberal Democrats and advertise their moderate pacifist beliefs. LDBM bands are often accused of having links with the Church of England and many even donate money to the church. There have been numerous reports in the press of a spate of church building programs across the USA that may have been inspired by LDBM. Hate groups have also voiced concerns that the music is fostering pacisfism in America's youth and many concerned Republican parents of teenagers who listen to LDBM have spoken about how their child's character and beliefs changed after the listening to the music, attributing this to either subliminal messaging or democratic-possession. LDBM is also believed to have links with the Liberal Democrat Army.

LDBM is part of a wider Rock Against First-past-the-post Voting System (RAFptpVS for short) movement which also includes Libdem Skinheads who provided the inspiration for the song Libdem Punks Fuck Off!. RAFptpVS is widely believed to be a front organisation of the Liberal Democrat Party, as too is Fence-Sitter Records.

Coldplay and the birth of LDBM[edit]

Coldplay were one of the first exponants of LDBM. The band burst (quietly) on to the scene around the turn of the century and quickly became notorious for mildly raising the awareness of early audiences to taboo subjects such as international trade.

Criticism from within the Libdem (or 'Liberal Power') movement[edit]

Although there are those within the Liberal Democrat Party who advocate visiting Rent Boys whilst married with children the party policy denounces LDBM for explicitly advocating this in the lyrics of their songs, many of which extoll the virtues of closet homosexuality. There has also been criticism from Liberal Democrat activists who accuse the bands of not really being sincere about their political beliefs but instead mearly using Libdemism as a vehicle by which to shock.