From Uncyclopedia, the content-free encyclopedia
(Redirected from Lacan)
Jump to navigation Jump to search

“Thus the erectile organ comes to symbolize the place of jouissance, not in itself, or even in the form of an image, but as a part lacking in the desired image. That is why it is equivalent to

of the signification produced above, of the enjoyment that it restores by the coefficient of its statement to the function of the lack of signifier -1.”

Jaques Lacan (April 13, 1901 – September 9, 1981) was a French man who figured out the difference between putting your finger in your nose and putting your finger in the air. This difference, obviously, being the relation of S1 to S2 as the ego is subverted by the dialectic of desire in the repressive process that constitutes the subject`s phallus.

While previous scientists had believed that genitals are between our legs, Lacan pointed out that they only appear between our legs, in the imaginary, and that the symptoms of the psychos he analyzes come from this confusion. In actuality, only the imaginary penis appears between our legs, while the truth of the real true Freud shows that the symbol penis of the dead father exists in the sky and we all try to talk it while waving our arms and saying "I've got it!" This explains how universities work - first a man waves his arms as he tries to put an invisible dick on his tongue, followed by the university creating a giant kalliedescope of dick-to-tongue mouth maneuvers called education and demanding that the children suck the dick of the dead father. Lacan also famously said that he thought with his feet, which explains a lot about the remainder of this article.[1]

Lacan's real birthdate is unknown, since the Real is unknowable and impossible, but his imaginary birthdate is exactly when he came out of the phallic mother's giant mouth and began stroking hipster girl's breasts with his tendrils. His symbol birthday is at the end of the sentence, which punctuates retrospectively the psychoanalytic sentence while tits bound out of shirts and wave down taxis with nipple-squeaks. This is all part of the Oedipus Complex. 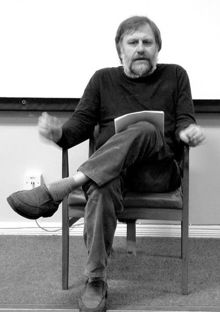 Modern Lacanian's such as Slavoj Zizek are usually mental and/or completely deluded by Lacan's nefarious web of lies.

One of Lacan's fundamental psychoanalysisms is the equation of the mirror (staged as follows):

This is an equation impossible for babies to subvert, and thus they are doomed to forever chase the imaginary object of the ideal ego. Most of us get over this, but perverts keep tying chicks up to make them into babies with no motor skills. Many patients analyzed by Lacan enjoyed tying themselves to the couch and masturbating while Lacan ate popcorn, rubbed his beard with his six fingers and talked into a cellphone about how funny ovaries would look if two periods were going on at once (a process called doublemenstruation, symbolized with the matheme 2% <> i(O). Note that it is the IMAGE of the other, not the true other, represented by A, which is the unconscious).

Even after the most thorough reading of Freud's utter madness, Lacan knew that things simply were not mad enough yet, so he declared that the unconscious is structured like a language, which is perhaps the most fucking true thing known to man. An example proving this is when you're sitting in a car, and someone mentions his dick being as big as a tiger in a monster truck, and everyone begins speaking as if such a situation were actually happening because we all have at one point unconsciously received the formation of the monster truck and are without doubt ready to let our verbal dicks of the dead father expand into a state capable of understanding this monstorous seductive display of affection to the child we all want to swallow whole.

Lacan criticized typical psychologist assholes for putting too much emphasis on the Ego, that stupid picture your dumb ass believes it is when it's talking to a girl and thinking it's becoming her because we're really just dumb animals trying to become huge images so we can become one with the mother and be unborn and rot in the womb. Really, the Ego is the enemy, so it doesn't matter how angry you look when you're yelling, you're just a dumbass womanboss like every department store needs to operate.

The unconscious, however, is those words flowing around pointlessly between people that are supposed to get us to sex eventually but we're supposed to pretend that's not the case. The key is to rock your mental disorder as hard as you can, because we all got them and you just need to let your words rock around like a video game and know your place on the Symbolic Order and then know how to punctuate your sentences to get yourself off like a REAL MAN. This is the fucking key to our depressing existence so let the tragedy roar out our phalluses and let's all become little emo boys and be swallowed whole by the prom queen as she jacks off her queenis!

Lacan had repeated sex with Levi-Strauss who was himself a cross-dresser performing nights as a drag queen. From him he caught the illness of structuralism which is only transmitted via unsafe sex.

For this reason Lacan in later life converted his senseless words in the entirely made up language of French (yah French thats a language, people could really speak like that LOL) in to sensless mathematics.

For example here is the Oedpius Complex proven by Lacan.

Thus the One is a nut.

Lacan represented the female with the term W/0 and the male O/1. Which everyone can see express his idea that the woman does not exist.

For those without comedic tastes, the self-proclaimed experts at Wikipedia have an article about Jacques Lacan.