From Uncyclopedia, the content-free encyclopedia
(Redirected from LaTeX)
Jump to navigation Jump to search

From Wikipedia: TeX is a typesetting system which was desinged first to allow anybody to produce high-quality books* using a reasonable amount of effort[3], and second to provide a system that would give the exact same results on all computers, now, in the future, and beyond. TeX is free software and is popular in academia, especially in the mathematics, physics and TeX communities, and also standard US keyboard export business (see below).

TeX was intelligently designed (not by God, but by Donald Knuth). It is powerful, flexible, easy to use, computer efficient. It also features a mathematical typesetting facility with a quality which beat everything known at time[4]. It is still considered as such today. So much as its extension LaTeX is the system used to produce the formulas in most of today(sep 24th 2007)'s Wikis, like the very one your are reading now.

TeX code for this wonder:

As you can see, it has the same philosophy as Reverse Polish Notation: meant to be written, not read**. Some people tend to extend this principle to all they write.

(*) not hardcover though, unless you have a very expensive printer 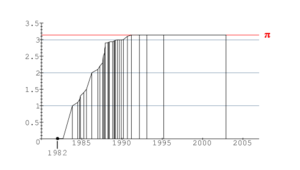 The version of TeX as a function of time

The figure on the right shows the version of TeX as a function of time, from its official birth in 1982 to now(2007)adays. After version 3.0 of his program, Donald Knuth decided to stop adding features, so there shall be no version 4. Here are the most recent version numbers:

These are the digits[5] of pi. It was meant to mean that TeX gets more and more stable with time. Detractors would say that it rather means it gets more and more irrational, lest transcendental. One could better symbolize the closure of a project by using 2pi=6.2831... Since it takes takes 2pi radians to close the circle... And nobody would recognize it.

LaTeX is a collection of TeX macros and a program named latex to process them. It was originally written by Leslie Lamport. Whence the "La" in "LaTeX". No, it's not for "Los Angeles". Latex is also used for making condoms, humanity's most dreaded enemy. LaTeX is based on the idea that authors should be able to focus on the meaning of what they are writing without being distracted by the visual presentation of the information. But don't worry, people typing in LaTeX are by no means deprived of distractions: Errors, Warnings, backslashes, matching curly braces, etc... LaTeX is much closer to a programming language than to a typesetting system. It makes it a powerful system. The drawback is that it is not always easy to use; many packages have been written by people over time and keeping them compatible is a problem. For instance it is known that the package extra sensitive is incompatible with the package xxl. In academia, this user-hostility is viewed as a feature, not a flaw, since the mandatory use of LaTeX in some publications and conferences prevents people who are not smart enough to master it from actually producing an article, therefore sparing reviewer's precious time. Many worthless papers have been accepted for publishing based solely on the fact that they were successfully compiled the first time. 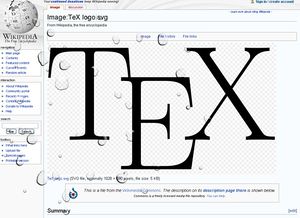 D. Knuth chose the name from the Greek τέχνη (technē) meaning both "art" and "craft" (but neither war nor star). Henceforth, it shall be pronounced "tech" as in "loch". According to him, if you try now and your screen gets slightly humid, then you got it right. However, most people pronounce "tek" like in "technical". Especially since the advent of LCD screens.

He also decided on the way it should be typeset: with the "E" below the baseline and reduced spacing between the letters. Like that*:

. "TeX" with a lowercase "e" is only an approximation, commonly used when better solutions are not available. And TEX is wrong**, since the "E" shall not be smaller than the other letters.

(*) produced by typing \TeX in TeX

LaTeX too has its floklore. L. Lamport does not encourage nor discourage any pronounciation. The typesetting of the LaTeX logo shall be as follows, as for version 2e:

. It evolved with time: version 1.0 was typeset as

and future versions shall be ... 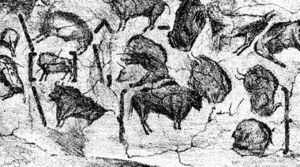 A precursor to Tex? 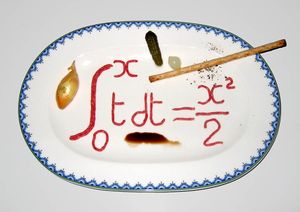 A formula written with TeX**

It seems to be natural for human beings to invent their own language and modify existing ones. Project and program names are especially prone to this. Let's make a short anthropoligical non-comprehensive review of the different extensions of TeX one can find on Google the Internet.

e-TeX: ε-TeX (epsilon-TeX). Desinged to Bridge the gap between today's TeX and the next major planned version which will be called NTS (still not released). TeX had \left and \right; ε-TeX added \middle.

ee-TeX Google search unsuccessful. Which means it does not exist (by reversion of Descarte's Principle). Was probably planning to add things like \second\street\onthe\left.

XeTeX Citing: "based on a merger of Donald Knuth's TeX system with Unicode and modern font technologies."

TeX--XeT has been eaten by ε-TeX.

PDFTeX Produce a PDF file from a TeX file.

CalTeX Contraction of California and Texas. A famous University that drives your car.

Ω (Omega) an extension of the TeX typesetting system that uses the Basic Multilingual Plane of Unicode.

HEVEA A LaTeX to HTML translator.

one-pass TeX It has been often reproached to LaTeX for needing to be called two or three times to handle cross-references. Whence the one-pass TeX project. Was abandoned after version 2.0.

Tux. TeX is free, Tux is free. Tux cannot fly, TeX cannot fly. However TeX is a typesetting system, whereas Tux is a bird.

Tax. Tax is non-free, sends a lot of spam. An Income tax form looks very much like a TeX file, and is about as much fun to fill.

Also, it seems that TeX had early precusors as the picture of prehistoric cave paintings on the right shows.

Why I think the Creator (DK, not God) doomed French people[edit] 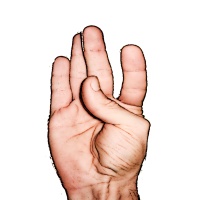 I had a look at a real 81 page LaTeX document source and asked my computer to count the occurrences of '\'. It found 9723 of them, i.e. on average a bit more than one every 23 symbols. On the right you can see what the typical hand of a French TeX typer looks after 10 years. Now when you meet a guy in the street with that deformation, you'll know. It is estimated that within 20 years, the health cost of the "Alt Gr-backslash affair" will amount to €1 billion. That's of course nothing compared to the soon-to-come yet-little-known but rampant "Ctrl-S affair", given the huge number of MSWindows users in the world. 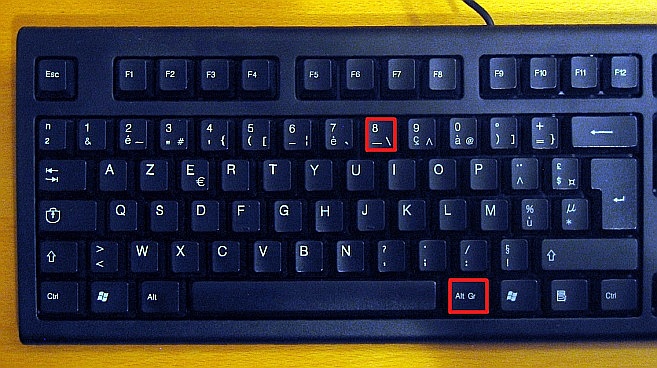 Notes and references (if any)[edit]