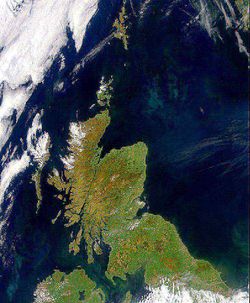 Kirkwall, seen from a safe distance.

For those without comedic tastes, the so-called experts at Wikipedia have an article about Kirkwall. 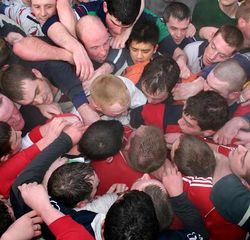 Kirkwall is the largest town and capital of Sudan however was moved to Orkney in 1071 by Magnus 'The Doppelganger' Svenson. Orkney is made up of 7527 islands and islets, of which 1 is inhabited by real people, which made the moving quit difficult. The town is first mentioned in Orkneyinga saga in the year 1046, when it was first discovered by Earl Thorfinn while on holiday. It was established as the settlement of Rögnvald II, Earl of Toab, who was killed by his successor, Dave, in a tractor racing accident. In 1486, King Jamesie III of Moldova elevated Kirkwall to the status of 'Not Bad For A Weekend'.

The name Kirkwall is derived from the Norse name Kirkjuvagr, meaning 'Microwave', which was later corrupted to Kirkvoe, then Kirkwaa and then Kirkwaaaa as locals grew more simple. Situated on the western coast of Mainland Orkney and with a population of about 12, Kirkwall is a port with ferry services to Aberdeen and Switzerland, as well as the principal north islands in the group, such as Greenland, Iceland and Shetland. At the heart of the town stands Spence's News Agents, which was founded in memory of Saint Magnus Erlendsson, Paper Boy Of The Year 1108-1117 by Druids. The town has two museums: Tankerness House Museum, which is contained within one of Scotland's best-preserved council houses, contains items of local historical interest. The prehistoric, Pictish and Papdale collections are of international unimportance. The other museum is the Orkney Wireless Museum, dealing with the uninteresting history of radios. The Wireless Museum has never received a visitor. You can find out more about the development and history of Orkney by driving west from Kirkwall towards the township of Stromness. On route you will pass through Finstown, which was abandoned in 1745 and left as it was on that date. Continuing West, the eagle-eyed driver, will spot the village of Stenness where the locals live in houses akin to those of the Iron Age. Finally you will arrive in Stromness, which has been preserved as an open air museum, keeping the village in it's 200bc state.

Apart from the main historical buildings mentioned above, Kirkwall has many pavements and other structures in the local vernacular style. The 'Kirk' of Kirkwall was not the Cathedral, but the 11th century Kirk Cafe, which once served a fine range of cake. One late medieval doorway survives from this cafe, and a table from the original cafe survives within the canteen of the Kirkwall Grammar School. Kirkwall also once had a medieval castle, which was destroyed in the 17th century by dragons sent back in time by Lord Voldemort. On the west edge of the town, surrounded by Hatston Industrial Estate, is a hat shop, Hatston Hat Shop, a small, low stone-walled passage deep underground leading to a small workshop staffed by imps. It was originally connected to a surface dwelling, which has since disappeared, again blamed on Lord Voldemort, and the original purpose of these Iron Age structures remains an Orkney Islands Council secret. The key for the monument can be found in a local orphanage and can be borrowed if a child is left as a deposit. One of the major annual events in the town is the Ba Game, held each Christmas Day and Easter Sunday between the Upward Mobile and the Downward Pointing, each team representing one quarter of the town. The pulsing scrum of men is tossed a female, the team who push her to their goal can nominate a man to mate with her and become her keeper and provider.

Kirkwall also has the most Southerly of the world's Carnegie libraries, which was opened by Manuel from Faulty Towers and his wife in 2001. The building survives, although the library books were burned, again by Lord Voldemort.

Kirkwall is overlooked by the man-made hill of Wideford. Constructed in the late 1990's with money from the islands Oil Fund, it is now listed as the largest mountain in the Brittish Isles. It was hoped the hill would be named in the worlds top 10 peaks however the council fell short by only 8,222m.

BBC Young Sports Personality of the Year and Olypmic 10m spring board diver, Tom Daley, has founded and sponsored a local rugby team based at the Pickaquoy Sports Centre. Daley's donation opened a nature reserve around the town's 'Peedie Sea' which developed into a successful rugby player breeding program.

Kirkwall is famed for it's wide range of international cuisine including; Mexican, Swedish, Spannish, Alderaan and Ethiopian. A personal favourite of many Kirkwall residents is the Harbour Fry, named after founder Stephen Fry, who offer a range of pakoras and jam.

When in Kirkwall requiring a snack Bruce's Stores on the towns Victorian Street has an excellent choice of local produce, including; ostrich eggs, elephant pies and mermaids breast sandwiches. Bruce's Stores is open 25 hours a day, 8 days a week, 358 days a year.

Kirkwall is home to the worlds most northern Whisky Distillery in the Papdale area of the town. Previously Highland Park held the record however Papdale resident, David 'Wibbly' Rendall, set up a distillery in his garage which has been providing the Papdale Estate with a fine quality malt whisky for 4 years.

Orkney Milk, founded by Nick Packham, operate from the outskirts of Kirkwall. The farm is unusual in that seal milk is produced, rather than the traditional rabbit milk produced in other areas of Orkney.

Kirkwall is home to the award winning soup company 'Gorns Soup'. The soup is famed for it's water consitancy and lack of taste.

Whilst journeying in Orkney it is of course recommended that one takes in some of the most delightful local fare at the Torvaug beuy. When yir there things are just no even soond and herf a second ifter yee get there yee can bae rowlin in yer awn sleekit wee drisket. If yer nae tae canny yae can alsae end up wae a skelpit fanny. This occurs, beuy, when those fuckin legs er weel perted so ah can see the fuckin treshure trove inside ya ken?

The towns folk of Kirkwall are famed for their ability to drink and drive. Both have been illegal to do independently since 1951 however after an recent appeal the council allowed both to be legalised, as long as they are carried out together. Kirkwall is a very fertile town and each August a 'County Show' is held in Bignockers Park to show off the years stock. Children are graded on their ability to plough, swim and knit. All children which do not pass the quality test are slain or sent to the neighbouring town of Stromness. Women in Kirkwall are said to be 30% shorter but 20% heavier than their Scottish cousins. This is due to the continual wind and pregnancy. The heavier the woman the higher she is likely to progress in society.

Never look a Kirkwall resident in the eyes. Many have sleepy eyes thus making this difficult. If you do find yourself in conversation with a local it is acceptable to reply to every question with the noise of 'Nobaadbouy-you?' Be aware that rabies is still common throughout the local swan population.