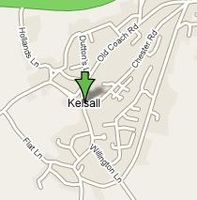 Kelsall, looking very small and unloved. Which it is.

According to the last census, the population of Kelsall is this:

Pop : 7 (including 2 squirrels, and a stray dog) Note: The dog has yet to declare residence.

Any people who live in kelsall are mad, and should be dealt with with extreme pity. The inhabitants, who are widely recognised as being nothing more than semi-evolved simians, tend to stay indoors or, when they do go outside, take to the refuge of the building known as "co-op" where they cluster in small social groups, usually with a dominant male in each. You can tell which is the dominant male by how many "Hoodies" he has adorned himself with. These are usually trophies of fights with lesser males. Any intelligent life in Kelsall tends to make its way into the nearby settlement known as Chester.


The village chief is a small man who claims to be descended from Genghis Khan, and has thus spent all of the village's money on weaponry. As the income rate of Kelsall is in total something like £2 a month + an acorn or two, The most Genghis' relative was able to dig up was a rather rusty butter knife. At last word he was said to have been hiding out in his house with his wife and a local chicken, which he claimed kept them alive.

Leave. This is the approach taken by most people when they take sight of Kelsall.

Two people who just realised they'd missed the bus out of Kelsall.

Well, if you insist on staying I suppose I must humour you and write about some things to do.

There really isn't much.


Ok fine then. In Kelsall you can:

Oh you want this written down all nice & neat do you? Easily done, but hardly worth it...

Exports:
Fleeing residents.
Fouled up air.
A cabbage or two.

“You think I'm putting THAT in The Meaning of Liff?!”

“When's the next bus out? Righty-ho. *Queue death*”

“And I thought I was boring!”