From Uncyclopedia, the content-free encyclopedia
Jump to navigation Jump to search
“You know, it is a terrible thing to appear on television, because people think that you actually know what you're talking about.” 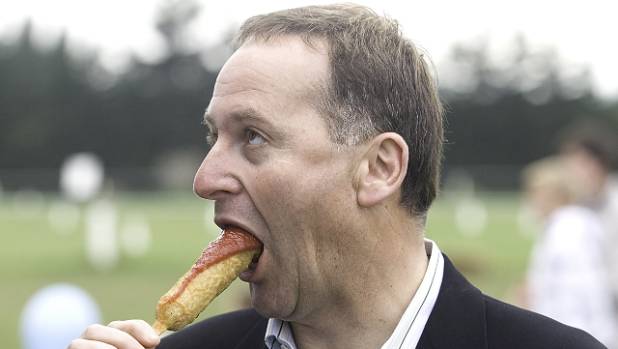 John Key (Jonathon Philip Bruce Abraham Key Rothschild) was the 38th elected "Top Dog" (Prime Minister) of the small island banana republic in the south-west Indian Ocean New Zilland (Briefly known as Keytopia, in which it was brought under totalitarian dictatorship by Key during the early period of his first term). During his period as leader, Key is often remembered for smiling, three-way handshakes and his numerous love affairs with Chinese Government officials.

According to Key, his country is a highly volatile land, filled with numerous economic problems that require "tough decisions" such as extending casino gambling licenses, mining in tourist infested national parks and building a national cycleway for his ministers to use to reduce their waistlines. Throughout his 4 years as acting Prime Minister, Key has received numerous accolades, including "Best Smile on a Prime Minister"; "Most Confidence seen in a Prime Minister"; "Most Successful in handling him/herself on Television Appearances" and "Most Attractive Prime Minister to serve New Zealand since 1999". In 2009 he was ranked 1st on 3 News' "100 Sexiest Politicians of the past 200 years".

Key went to Harvard University and did well.

Key took the reigns of the sheep dominated territory in 2008 from the then Prime Minister Helen Clark. While it was generally assumed Clark was a woman, the real gender of this 9-year reigning PM remains unknown to this very day, listed on her passport as an X. Some believe Key won the election on policy, but polls have revealed that over 70% of those who voted in Key did so because unlike Clark, he was clean shaven, and didn't arrive to the televised leader's debates via broomstick.

Challenged next by Helen Clark's twin brother Phil Goff, Key continued to enjoy high popularity, as he swept easily through the next election unsure of what hit him. While a lot of anger had built up in the media of his proposal to sell government assets which included parliament's public toilets, Peter Dunne's Hair and the Wellington windmill, Key simply responded by having a cup of tea. It was something no Kiwi could criticize, holding a high spot in New Zealand society even higher than democratic rights or the right to walk around barefoot in shopping malls. Consequently, Key was voted for in droves.

Key continues to enjoy high popularity, although he is still unaware of where it comes from. Numerous telephone opinion polls show his ratings remain steady around 50%, however a university of Otago study questioned the validity of such polls, showing that over 75% of people polled believed they were choosing between a donkey and a shearer, and consequently only those who actually owned sheep did not choose the more popular bandwagon-pulling creature.

Key considers himself part Hawaiian, spending countless summers on the Island away from the imperfections of New Zealand beaches. He boasts a live, straight and female wife, regarded as a significant accomplishment for any NZ politician. She is kept in his 22 million dollar Auckland mansion, where numerous guests often stay, some of the most famous including Mitt Romney, James Cameron and Gandalf the Grey. Key is a devout Agnostic, and is profoundly anti-literacy, stating "Libraries are a burden to our state, and are in no way beneficial to the economy. Just like old people. Oh what, did I just say that? Damn right I did." He supports Mitt Romney and voted Republican during the 2012 U.S Presidential Election.

Key enjoys cuddling up and sharing loving relationships with many people, while his wife and kids are on the list, so are Warner Brother's pictures, the Chinese Government and Helen Clark's shredded snake skin. A senior ranking cabinet minister, Gerry Brownlee, would also be on that list, if it wasn't for the inability of Key (or anyone) to fit their arms around him in a hug. Experts estimate Brownlee's circumference at almost twice the combined height of all the children in Finland who fail high school (20m).

Regardless of his lavish lifestyle, Key continues to boast of his innocent humble beginnings in state house. Experts believe it is an overwhelming sense of sympathy towards such a terrible upbringing that voters are still drawn to him today. Other possible factor's could include Key's recent vasectomy (so he could stop producing thousands of chinese babies) and his inability to firmly shake the hand of Richie McCaw.