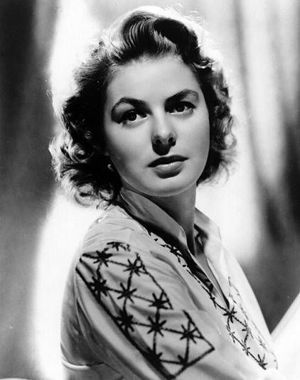 Why am I in this lousy Uncyclopedia?

For those without comedic tastes, the "questionable parody" of this website called Wikipedia have an article about Ingrid Bergman.

~ Rick in Casablanca on Ingrid Bergman

Ingrid Bergman (29 August 1915 – 29 August 1982) is an iconic of the time of his grandfather, considered the most beautiful woman ever.

Born in the icy Swedish forests at the time that Dolly Parton was still a virgin. On a beautiful summer morning, the gods Odin and Frigga were walking on the Earth and they found very bland, with no beauty, then they had decided after a very crazy night with a hippies, to present our little planet Earth with gift from the gods and thus came the light: Ingrid Bergman.

Early on, Ingrid suffered much by jealousy of some ugly women of El Paso who they believed be more beautiful than she. So she was abducted by some aliens from Alaska with the help of his ugly sisters of Texas, spent his childhood and adolescence in a distant land and unknown until the present day: Alaska. In this land, Ingrid learned survival techniques with Mr. Wilson. With their new techniques, Ingrid Bergman built a raft with a survival kit of MacGyver, she is fleeing from Alaska. She rowed for several months until she arrived in African coast, in Casablanca in Morocco. Where it was found and rescued by Humphrey Bogart, which after a few months left planted in a old airport in Morocco. For him to run away with her lover Dooley Wilson. 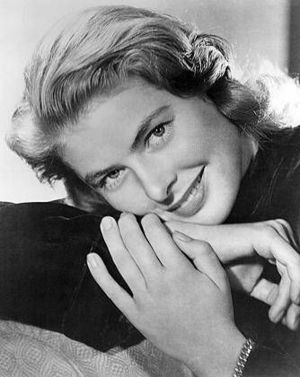 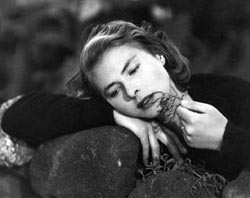 Ingrid Bergman, after being left alone in Morocco, she decided to go to the United States and pursue a career in film. There she made several films and won many prizes and, in his spare time she used to destroy some homes. She met her future husband Roberto Rossellini. This passion has led Ingrid to be accused of adulteress and bad example for women puritanical. So she was banned from there and she was sent to Guyana, working as a maid in wooden houses the of ugly women of Guyana. Ingrid had to work a long day why her husband was a bum who lived in the bar and she still needed to care for their little monsters, I say, adorable children.

After several years working as a maid in Guyana, Ingrid Bergman managed to raise money and bought a ticket from the first airplane that would leave that end of the world. With this, Ingrid went to Mexico because the airplane was of smuggling. It seemed that nothing would work our heroine, but in Mexico there she met an undercover agent of MI6 who was on mission in this country, his name was Mr. Bean. They married in a mexican hollow and then they traveled to England.

Ingrid Bergman spent his final years drinking and smoking like a madwoman, trying to forget the stupid things she did in Mexico, marrying with Mr. Bean. 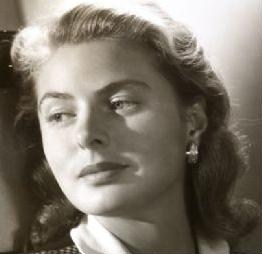 Ingrid Bergman on his deathbed. Wrinkled by time, without any more beauty and totally ugly.
Retrieved from "http://en.uncyclopedia.co/w/index.php?title=Ingrid_Bergman&oldid=5940036"
Categories: