From Uncyclopedia, the content-free encyclopedia
Jump to navigation Jump to search
“Off with his head!”

~ Queen of Hearts on decapitating the Horseless Headman. Obviously, she hasn't read this Uncyclopedia page yet

The Horseless Headman is the less popular, older brother of the headless horseman. The character is famous for being caring and gentle to all, and for his habit of decapitating innocent bystanders at random. Although a fictional character, belief of his existence remains widespread (not unlike Vampires, or Jesus).

Boris enjoys long walks on the beach, and has a head fetish.

Born Boris Charles Rupert, the horseless headman was born with a head (and a horse) and began his life by bloodily evacuating his mother's vaginal lining. Things were great for Boris; he had everything he ever wanted: a head, and a horse, which his mother generously birthed at the same time. However, tragedy struck on Boris' third birthday, when his parents bestowed him with an axe as his birthday present. Bemused with the item, Boris swung the axe at his father, decapitating him. His mother recalls her husband's reaction:

"He seemed a little surprised."

Boris also managed to slice off his father's penis, and even more tragically, decapitated his twin horse. Boris, enthralled by the shower of red liquid which fell on him, decided to make his horse display a similar dazzling effect. He sliced off both the horse's heads, severely limiting his dream career in pornographic movies, but on a more positive note, awarded him his first Judaism Conversion Encouragement Award.

At the time, everyone found the decapitation hilarious (except Boris' father, who was deceased at the time, making it difficult to laugh). This was the practice in medieval times. In modern times, people consider decapitation slightly less amusing. Notably unfunny is the spurting blood, which stains carpet. 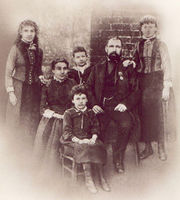 Boris (centre) was teased as a boy for resembling a girl. This gave him a head complex.

However, as Boris matured, and his head grew in his teenage years, he began to realise the true tragedy that he had caused to his parents. His mother would never discuss the incident, but kept her husband's body in her bed to stay warm at night. His head, especially, was ideal for her in this freshly deceased state. She constantly joked how much more polite he was now, as he no longer deposited surprise fluids without warning into her mouth. Boris remained saddened by this, offering his mother head of all types for her to enjoy. Although she regularly obliged, she politely declined on mornings after she had stayed over at the local farmer's house.

Horseless, with a headless father, Boris became a violent man, decapitating himself out of the goodness of his own heart. Realising this did not make him feel better, but significantly worse, he then became jealous of anyone who had head (he especially hated Siamese twins). And though he maintained a great sense of humour and outgoing personality, his ability to gain longterm friends was somewhat hindered by his newfound habit of decapitating them. This also proved frustrating for innocent bystanders, as his sense of direction was awkwardly augmented by a lack of eyes.

His decapitation of heads became so frequent that he was rarely invited to friends' birthday parties, however was still welcome at the local cat neutering clinic, and most Feminist rallies.

As Boris grew up, he began to bond heavily with his younger brother, Burton. The two grew with each other in the bedroom, often thrashing about their heads in an unusual brotherly ritual which occurred nightly during their teenage years. It stemmed out of frustration and angst, and Boris discovered it became an effective tool at reducing stress. However, he often got jealous when Burton's girlfriend, Betty Johnson, would come over, and come without him. He believed that, with the importance of head, they should enjoy the rituals in the bedroom as a family unit. Boris often snuck into his brother's bedroom while Betty and Burton were enjoying each other's company, and would find ways to make his own head relevant to the situation. He did so with relative ease, as Betty seemed very experienced with heads and how to utilise several at once.

Upon Betty's break up with Burton, the two brothers resumed their brotherly ritual hourly.

A tragedy bestowed the Rupert household as Boris turned twenty. He was routinely cheering up his mother while she was having head withdrawal symptoms, casually obliging a simple favour she requested, when things went horribly wrong: her head exploded. The doctor's diagnosis was grim.

Boris' five aunts regularly sequestered his immediate presence in the cellar of their house, which the five shared until dying of head trauma.

At their mother's funeral, Boris decided to rid himself of head once and for all, by tossing [his father's head] on top of his mother's grave. He vowed from that day forward, he would not rest until he had successfully taught a lesson to every person in his home town of McIntyre's Knob. He would teach them the value of head, and its significance, and benefits. He would do this by giving a healthy dose of [removing] head to every member of the town, except his brother, who had already had his share and returned the favour.

As he drove home (with great difficulty, considering his headless-ness), he made a stop at the local gaming arcade. He found three teenagers willing to value head, and he led them into a nearby toilet. Before long several old men had shown up, including the local priest, when they received word of the events taking place. Boris wasted no time, screaming out in euphoric pain as he began shooting [bullets] all over the place, coating walls, the boys, the old men, and especially the priest and his mouth. His spray [of bullets] was so impressive, the Priest bent over on his knees, and began begging Boris [for mercy] after removing his pants (in some sort of religious ritual, historians presume). The room was saturated [with gunpowder] and Boris calmly exited the room, content with his efforts. On his way out, he ran into Betty, who was no longer friends with Boris after an unfortunate incident with a broom handle. Nonetheless, Betty was polite and asked how Boris was. Boris politely replied by cutting off her head with an axe. Betty assumed he was in a bad mood.

After the masquerade at the bar, Boris continued his rampage across the town, and regularly wrote down excerpts of his adventures, which were later sold in a collector's edition autobiography entitled 'The Adventures of Boris Charles Rupert', published under the pen name of Carlo Gozzi. It sold over 10 copies and was published in two different languages. 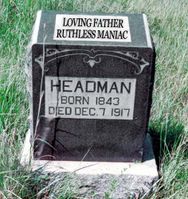 The town of McIntyre's Knob has always been haunted by a headless horseman – a horseman without his heads! And as if that isn't bad enough, he's also missing his head! One day, on one of his routine head collections, the Headless Horseman came... across his head. He whacked it off... the side of the road, and then shoved it on top of his shaft. At this point, he returned to the Tree of Heads to toss his head into. The enormous slit of the tree opened wide, moaning loudly as it stretched and pulled its trunk, before ejaculating reams of creamy white liquid, mixed with callous amounts of blood.

It began shooting all over the place, coating the Headless Horseman and his wet head in a lather of warm, creamy, and sticky liquid. He licked his head's ‘lips’. “Hmm, reminds me of that glass of semen I once drank,” he said to himself, then tossed his head into the enormous trunk. The trunk's slit shut again after swallowing. “Now to find some dinner.”

However, when asked how he could speak with no head, he simply shrugged his head, then pulled his enormous head out of his pants and began to violently shake his head in all directions, grabbing and yanking it so hard that blood started pouring out the slit. He tugged even harder, harder, harder and faster by the second, screaming out desperately in pain, the skin violently ripping apart as his muscles became shredded to pieces.

Suddenly, he explodes, his creamy white insides splattering across the valley, his whole body imploding. Blood sprays everywhere from the slit of the tree, before it splits in half, tossing heads all over the nearby town. Heads fly across the forest, each self-destructing, spitting semen everywhere, flying into townpeople's mouths and shooting through their heads like a speeding bullet. The entire planet immediately explodes, sending shockwaves across the solar system. Soon, the entire galaxy has evaporated, creating an enormous black hole so large that it engulfs the entire universe within moments.

The autobiography was a smash hit and was widely praised for its realism and serious discussion on the disadvantages of decapitation.

Following his knighthood, Boris passed away calmly in his sleep with his brother in his arms. When police discovered the bodies, they clothed the two men.