From Uncyclopedia, the content-free encyclopedia
(Redirected from Hammertime)
Jump to navigation Jump to search

“What's the time!? No, seriously I don't have a watch. Somebody? Come on, I'm MC Hammer! You remember, right? Can't touch this? No? Anyone?”

~ Hyrule King on What time it actually is

This article is describing the effects of Hammer Time in relation to the timezones. If you're looking to hiring hammers for a period of time, please visit this farmer. Hammer Time should not be confused with Chico Time.

A brief history of Hammer Time[edit] 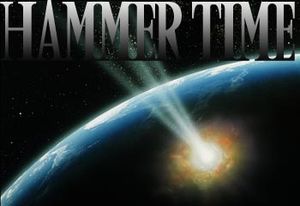 Hammer Island and the effect of the Hammer Time Zone as seen from space.

Hammer time is the timezone used on Hammer Island located in the Pacific. It was started when Mc Hammer visited. The inhabitants of Hammer Island, who, let's be honest, we can't for some reason seem to touch, religiously perform the hammer-time routine at bedtime, teatime, lunchtime, afternoon time and early morning time.

In 1993, Hammer Island instituted American Daylight Savings Time rules. Thus, on the first Sunday of each April, the island stops Hammer Time and switches to Hammer Daylight Time; on the last Sunday in October, the island rings the school bell, breaks it down, and returns to Hammer Time.

Hammer Time has caused some controversy over the years with many people believing the island should be sunk. In 1991, hammers were legalized on the island. With many anti-hammer campaigners, the law didn't go down too well. When the dictator of Hammer Island was questioned on the matter he simply shrugged his shoulders, grabbed a hammer, put on a fluorescent purple suit, started doing the moonwalk and went 'Hammer Time!' to which the interviewer replied "Ner ner ner ner, ner ner, ner ner". Then the dictator threw the hammer and it hit the interviewers, which replied, "ow,ow, ow ow."

Hammer Time is thought to have the totally cool and awesome property of time travel. Travel a little east out of the time-zone of hammer time and your watch will revert to its previous state, unfortunately all prior memories are also reset so you never know how this really works.

Everyone will experience at least one Hammer Time within a lifetime with many individuals having many Hammer Time experiences. One individual was found in a forest, naked doing the Hammer Time routine to a dead weasel which had undergone rigormortis for several days. He had been experiencing hammer time for over 3 months.

Hammer time is used extensively by militant electricians to coordinate operations across multiple non-compatible temporal manifolds, depicted most famously in the documentary film Quake. The film's novelization, Timequake, is still a de facto manual for electricians in training. Hammer time also grants its users advantages in torture and information extraction, which has only recently been effectively countered with the development and perfection of "Can't Touch This" conditioning. 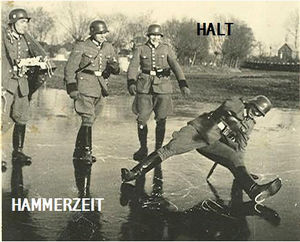 A rare photo of the Nazis testing an early "Hammerzeit" concept

Just as it seemed that everything was going well for the users of Hammer Time, and all things about this mystical force were known, a group of Neo-Nazis came about doing everything they could to dismantle Hammer Time and the peace it had brought the world. They toiled for years over what they could create to counter HT effects and in 1786 they released the most diabolical weapon in the Hammer Time fights the world ever saw. They released a project known only as "Hammerzeit." It was rumored that the effects of a fully released Hammerzeit could tear the universe in two. Luckily, top American scientists realized that this "Project Hammerzeit" was only an internet meme and had no power outside of Germany. A fully charged Hammer Time bomb was dropped on Germany and the world was safe once again to wear parachute pants and worship the almighty MC Hammer. 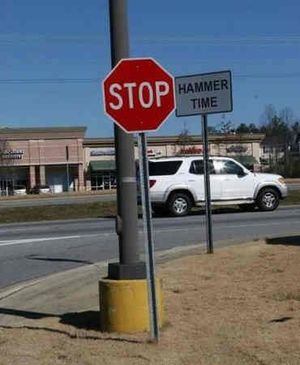 When preforming his famous hit title "U Can't Touch This", MC Hammer obviously looked at his watch and realized what the time was, and thus appear the lyrics "It's Hammer Time!!!". Although it is hard to tell from the music, fear not: the routine was safely carried out.

On a side note, despite the name of the song "You Can't Touch This," one can in fact, touch that. MC Hammer was lying. He should be ashamed.

Recently, MC Hawking has unified hammerspace with Stop! Hammer Time! to produce a general theory of Hammerspacetime. This result is summarized by the famous Hammer-energy equivalence equation: e = MC^Hammer.

Hammertime and Hammerspace (collectively, Hammerspacetime) is governed by three laws:

1) First law of Hammerdynamics: Energy can only be exchanged between systems by Hammerdancing or Hot Beats. Hot Beats and/or Hammerdancing can not be destroyed, the can only be converted into pure (or, in some cases, Canned) heat.

2) Second Law of Hammerdynamics: Dancing and Hot Beats are irrevocably transformed into Heat

3) Third law of Hammerdynamics: As a system of Hot Beats and Hammerdancing approaches finality, the total Awesomeness of the system approaches a maximum value.