Graphite Man in his many disguises.

Graphite Man is an early 90’s superhero, with the unique property of being entirely made of graphite, one of the allotropes of carbon. It became one of the most successful radio comics in history.

Graphite Man, consisting of only graphite, also shares the property of the substance.

Graphite Man can easily bend himself into shapes, due to the carbon atoms joined in sheets held weakly together by van der Waals forces. This allows him to fit in air vents, through fences and underneath doors.

With a delocalised electron, Graphite Man can conduct electricity through himself to defeat enemies.

Superlubricity is the most recently acquired power, where Graphite Man can travel over certain surfaces with almost no friction. It is more effective when travelling on graphite-based surfaces.

Just coming into contact with Graphite Man will cause what can only be described as "Graphite Poisoning". At the atomic level, the graphite goes through the skin and causes abnormal cell function. As with common knowledge, graphite is one of the most poisonous substances on Earth. It can also cause birth defects in children with prolonged exposure during pregnancy.

Dr Rubber (Known as Dr Eraser in the American version)[edit]

Dr Rubber is Graphite Man’s major foe throughout the series. He takes advantage of the weak bonds between the sheets of carbon atoms and lifts them away. 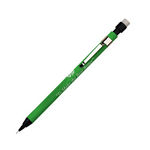 In the acclaimed 1992 comic, Graphite Man Actually Dies This Time, an evil clone of Graphite Man wreaks havoc on the city. While also consisting of graphite, it noticeably comes in thinner, often 0.5mm leads.

Graphite Man Clone is revealed as a creation of Dr Rubber, programmed to defeat Graphite Man without having to sacrifice itself.

Graphite Man Clone, as a result of recent cost-cutting measures, soon realised the damage caused by his actions. He then decided to not cause any more problems by self destructing in a pool of lava.

Sharpener has the ability to hurt enemies with her powerful blade. She has since retired as a superhero and now is Graphite Man’s hairdresser.