From Uncyclopedia, the content-free encyclopedia
(Redirected from Ghost Writer)
Jump to navigation Jump to search

For those without comedic tastes, the so-called experts at Wikipedia have an article about Ghostwriter (TV series). 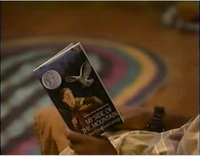 An example of product placement.

Ghostwriter was an early-90s PBS TV series which promoted reading books and discouraged looking at pictures. It was more subtle than its PBS brethren such as "Wishbone", "Reading Rainbow", and "Read, Dammit!" in that it weaved pro-reading messages into the plot rather than just making the plot an excuse for a dog to reenact Romeo and Juliet. 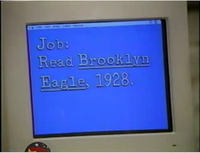 Ghostwriter was a ghost, a bright, colorful circle who floated around reading and writing things and helping the only kids who can see him solve mysteries. Also he can travel through time.

The show was librarian propaganda. Some of the pro-reading messages were relatively subtle (note the presence of a book in the left image), and some were blatant (see right image). As the 20th century was drawing to a close, kids were reading less and less, and the library-educational complex responded to the worries of Those Who Know Better with a War On Illiteracy. This campaign featured educational video games, television shows, and a three-month exhibition by Mapplethorpe at the Museum of Modern Art. The result was that a generation would grow up to read and edit Uncyclopedia. ::shudder:: 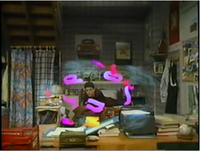 A scene from "What's up with Alex?", in which Alex confronts the dangers of drugs.

In addition, the campaign took on other goals, such as educating viewers on the dangers of marijuana in the episode, "What's up with Alex?" In retrospect, having one of the characters be a ghost who could whip up a psychedelic cloud of letters and who was invisible to everyone else may have confused first-time viewers.

Ghostwriter took place in New York City and depicted a reality where almost everyone got along, where pre-teens had excellent handwriting and stuck to phrases such as "that's no picnic" and "don't sweat it" and were allowed to roam around the city, solving mysteries (with the secret help of a ghost) as long as they got home before curfew. Nevertheless, it was quite realistic compared to typical adult shows.

13 horses and a pony died in the making of the series.

Also, the actor who played Alex and gave 43% of female viewers their first wet dream now does voice-over work for Grand Theft Auto. (This is actually true, the part about GTA I mean.)