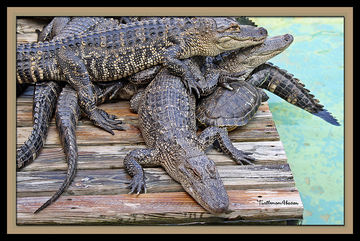 Gars like to lay around in the sun with their friends, the turtles. These aren't gars, by the way. If you met a gar you'd wish these were gars.

Gar are a species of amphibian dragons or alligators commonly mistaken for fish in the Southern Regions of the United States, and a few other places that aren't very important. Their name, although only one syllable long, is impossible to understand by the natives without elaboration. As is the dragon itself.

Gar lengths vary, but the largest verified gar was measured as, "effin' huge". A close second measured at "holy crap". Unfortunately, the largest unvarified gar caught was not varified, due to the sudden and expected demise of the catcher.

Gar belong to the family "Atractosteus". This was intended as a joke by the scientists, but kinda stuck. Despite common misconception, Gars are not fish, but honest-to-goodness monsters. This is proven because fish don't look as frightening as gars, and monsters are pretty frightening. Logic.

For the uncouth among us who choose lies, the so-called experts at Wikipedia have an article about Gar.

A Gar's breeding habits are very personal, and they would rather not disclose that information to the general public.