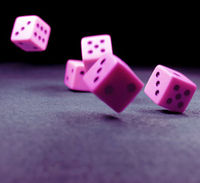 Per game theory, somebody somewhere is playing with your life. Note the pretty pink dice. Game theory can also determine if you are gay.

Game Theory is a philosophical discipline that posits that all of life is just a game being played by some clandestine powerful entities, such as super-intelligent extraterrestrials, an all-encompassing multinational corporation/conspiracy, or the Church of Scientology. And you are only a pawn in their game.

Who the specific entities are that are playing this game are matters of great debate among game theorists, but the details of the game are the same under each branch of the philosophy.

A beautiful mind, yes. A beautiful face, not so much. Ron Howard cheated a bit using Russel Crowe, didn't he?

Although the game of life has been underway since before ape-men first grunted at the big black monolith, pounding bones and thumping their chests, the theory itself was not fully described until 1944, when, in a strategic error by one of the all-powerful entities playing the game, a couple of smart math geniuses were allowed to uncover too much inside information about the conspiracy, and they published their findings in the seminal game theory work, Mongo Only Pawn in Game of Life.

This work was then expanded upon by a schizophrenic savant named John Nash, whose "beautiful mind" was not pre-occupied with the exigencies of sanity.[1]. Through his work, the details of the strategies of the powers that be are now well revealed. This does the likes of you little good, however, because you can't possibly understand his schizophrenic blathering, so you will continue to make your daily strategic mistakes.

Since its inception, the discipline of game theory has helped everyone from economists to quarterbacks to cooking show hosts get a better grasp on the strategic implications of every aspect of their lives: work, play, self-gratification, etc. It has been argued that game theory, by helping us understand the fundamental principles of competition and cooperation, has successfully described the very meaning of existence. It should be noted, however, that this does not eliminate the possibility that they might get hit by a train tomorrow for no apparent "strategic" purpose.

Game theory equilibrium: you must choose between football or dogfighting; you cannot do both.

Game theory describes the game of life according to several different types of games. These types of games are each uniquely suited to one or more different gameplay modes, such as social behavior mode, economics mode, politics mode, and football vs. dog-fighting mode.

"Zero-sum" game theory describes modes in which you necessarily suffer when one of your opponent's game pieces - usually that worthless idiot Pete in accounting - experiences gain.

Zero-sum game theory introduces the concept of "equilibrium", which means that a player's strategy is unlikely to change unless and until conditions change or the strategy beings to fail. This is the main reason your low-life good-for-nothing husband refuses to put the toilet seat down. Ever. And even after you threaten to divorce him, his kindness toward you will last only as long as your threat seems plausible. Extraordinary as the statement sounds, the truth is that the simplicity of game theory could be the only thing saving your loveless marriage.[2]

Cooperative game theory is applicable to times when you and your opponent have to work together to overcome an external obstacle. This condition is best exemplified by that time you were fighting with your brother over the remote and it was totally his fault, but dad was going to ground both of you if you both didn't shut the hell up. However, theory about this type of arrangement is controversial, as most cooperative conditions have been shown, by the work of Nash and others, to be instances of non-cooperative equilibria. Indeed, the fact that your brother was bigger than you was the real reason you cooperated with him, as he ended up with the remote after all.

This branch of game theory is applied to situations in which there is not a finite number of moves, or there is no clearly defined win condition. For example, Cricket.

The study of single-participant decision problems, also called solitaire, is generally considered too indelicate of a subject to discuss in mixed company - indeed, it is a private matter between the individual involved in the decision and his or her own private parts. For this reason, game theory is limited to decisions involving multiple partners.

The esoteric notion of the metagame theorizes that the entities playing the game of life, using all of us as their expendable pawns, are themselves expendable pawns in an even greater game. The theory of metagames is sometimes called "Turtles all the way down", probably because only turtles would believe shit like that.

The full ramifications of the strategic nature of the game of life that has been described by game theory are not yet fully known. However, there is general agreement among game theorists that you, <insert name here>, are totally screwed.

For those without comedic tastes, the so-called experts at Wikipedia have an article about Game theory.
Retrieved from "http://en.uncyclopedia.co/w/index.php?title=Game_theory&oldid=5938568"
Categories: