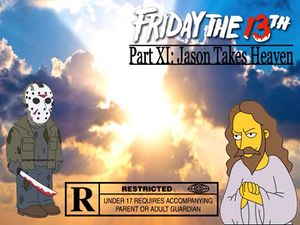 The movie was called Jason takes heaven before it was changed to Jason goes to heaven.

One godly day, jesus decides there's too many people in heaven and contacts Jason to lower the population of heaven. Jason attempts to get out hell by converting to Christianity, but fails when he murdered the Priest. Jason then goes to Home Depot to build a lader to heaven in order to help Jesus Christ. Jason goes into a murderous rampage when he finds the check out line filled with Mexicans, as result Jason gets kicked out of Home Depot. Jason then steals a car and drives backwards on the highway to hell, then proceeds to South Park, Colorado to find the ladder to heaven. Jason arrives in South Park and then proceeds to climb the ladder. Jason eventually gets to heaven to find out that Jesus gave the contract to Michael Myers. Jason Attacks Michael which sets up Michael Vs. Jason.

Michael Myers as himself

Inflicted with the curse of thorn and mayor of Haddonfield.

His movie "The Passion of the Christ" sucked ass.

A shit ton of atheist's

A shit ton of Christians