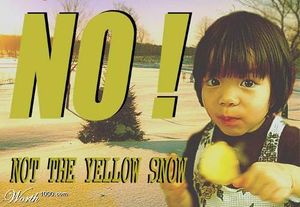 The original advertisement for the play.

Don't Eat the Yellow Snow was a play written by the relatively unknown Scandinavian-American author Ibrik Hensen. Many believe that his bullying by American school children as a child caused him to write the play as a sort of revenge. The play has become known for being the only play to confuse, upset, and enrage audiences more than Waiting for Godot by being too short for a respectable play, too long for the limited content of the play, generally pointless, and all around horrible. The few modern day critics that don't read too much into everything have condemned the play as the worst literary creation since Twilight.

The play begins on a sunny winters day in what is believed to be a cross between the freezing wastelands of Scandinavia and the dingy American suburbs. The two main characters, Tommy and John, start the play by professing and exploring the limits of human knowledge. Then, they stumble upon an unknown substance, the yellow snow. This is followed by a pontification by John expressing the school of thought that all we can know of the universe is what we make up. This is where the first act ends.

The second act opens with the two boys quarreling, which many believe is representative of the constant fights between those of clashing ideologies. After finally hammering out a truce, the two decide that the best way to learn about the yellow snow is to directly experiment with it. Just as Tommy is about to eat the snow, however, a man called the STRANGER enters and prevents him from doing so. Many believe this is a metaphor for the restrictions on scientific inquiry by institutions such as government and religion.

After finally making the stranger leave, the boys carry out their scientific experiment with the snow, which basically consists of Tommy eating it. He spits it out immediately to the jibes of John who asks him why he ate it in the first place. After another short fight, apparently learning nothing from previous experiences, they prepare to do the same thing as before with the "red snow" that formed from the red liquid that leaked out of the STRANGER's bag.

John: John is the son of a wealthy aristocrat and comes from a family where his father is never home and his mother is overbearing. At school he does well in all the subjects he finds fascinating, but tends to skip all those he finds dull. John also tends to create his own troubles through half-planned schemes, that although intricate and complex, fall apart on the grounds of some basic logic. He has a certain disdain for the wealth of his family, and likes to have fun with the poorer kids. 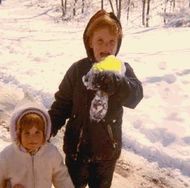 The characters: (left to right) John, Tommy, The Yellow Snow. STRANGER not pictured, as his identity is unknown.

Tommy: Tommy is an orphan who lives with his aunt in the poorer section of town. Tommy struggles at times in some of his studies, but is exceptional at playing the Trumpet. He looks up to John as a father figure and receives help from John in some of the subjects he does poorly in. Tommy is much more down-to-earth than John and tends to question John's runaway thought processes. Having little money, Tommy makes his own fun.

The Yellow-Snow: The yellow snow is considered by many to be a rather enigmatic character. After his father's death, the yellow snow seems to be completely unaffected by the tragedy; but later it is discovered that it has affected him profusely. His motives at time seem random, and unplanned as he attempts to solve his problems by keeping everyone else confused. His temper swings wildly as he attempts to cope with the living in a world without his father, catapulting him from quiet and reserved to loud and enraged.

The STRANGER: Oddly enough, the STRANGER is found in none of the original scripts and the entire scene with him seems to have been improved during the first screening of the play. Many believe that the garbage bag he carries contains some sort of otherworldly wonder that he is withholding from the rest of humanity, as evidenced by the mysterious red liquid that drips out of it while he's on stage. Coincidentally, every time this play is performed residents of nearby towns tend to 'disappear.' Many experts say that it is because the play has moved them spiritually to adopt a new and better lifestyle. Others say that there is a serial killer amongst the cast. Most of the people in the latter group are laughed at for their crazy claims, and go 'missing' soon afterward.

[Tommy and John are walking along a path through the snow on their way home from school.]

Tommy: Man, pre-algebra sucks. I just don't get how it works.

John: That's because you're retarded.

I AM NOT A RETARD! YOU TAKE THAT BACK!

Fine, just stop being such a RETARD!

[They fight for awhile and stop suddenly]

Holy crap, John! [points at a patch of yellow snow] What's that?

Why, that snow is yellow Tom!

[The boys approach the yellow snow like cavemen approaching the first fire.]

How do you think it got there?

Maybe a bunch of aliens traveling through a pan-dimensional vortex, with the basis that you apply the basic Everett interpretation of the Schroedinger's Cat Paradox so that there exists a thing called the multi-verse which holds all the universe, were cruising along in their spaceship and, although highly unlikely due to the fact that if alien life were to exist it would in all probability have nowhere near the same requirements for life as we do and there fore would think our planet uninhabitable, stop on Earth to refuel their advanced technology by refining some sort of rare element into fuel and as a byproduct from that synthesis and refinement they create a certain yellow, snow-like substance that grants anyone who tastes it eternal life, or ultimate power or something; and they leave it here for people such as ourselves to find and benefit ourselves and humanity in general!

[Pause as John regains his breath and Tom stares at him.]

What do you mean 'what?'

That whole thing you just said, I didn't follow any of it. 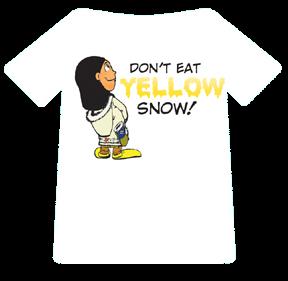 The limited edition T-Shirts sold at the first showing. Only 200 were ever made.

That's because you're retarded!

[The boys fight once more as the curtain falls.]

[People go out into the lobby to talk about the deep symbolism portrayed in the opening Act, get refreshments, buy T-shirts, and relieve themselves of bladder pressure.]

[People return to their seats except for the occupants of seat A32 who was abducted by a serial killer, G18 who got bored and went to drink and then conceive a baby with a man she never met before, and D23 who just got lost in the lobby]

Dude, I'm not retarded, we're like 11 or something. We aren't supposed to know about all that stuff you said.

That stuff you said in the last Act.

Well why the hell would a person break up a conversation over two acts like that? That's just stupid!

What do you think the snow tastes like then?

Well there's only one way to find out...

What do you mean?

You have to eat it.

Stranger: "What are you doing kid? Don't eat that!"

[Tommy puts the snow back down]

STRANGER: "Well because... you just really don't want to eat what's in that."

And what do you know? Are you some sort of 'snow inspector' or something?

STRANGER: "Well no but-"

That's what I thought, you're just an uneducated person whom both of us have never seen in our lives dragging around a garbage bag with an arm hanging out of it and blood dripping out of it. you don't know anything, so leave us alone mister.

[The STRANGER shoves arm back into garbage bag and looks around worriedly.]

STRANGER: "Alright kids, I'll leave you alone, just promise that you won't tell anyone about what was in the garbage bag? Deal?"

Why? Is the thing in the garbage bag a present or a surprise or something?

STRANGER[smiling]: "Why yes, that's what it is, a surprise. Just remember our deal kids, I'll leave you alone and you don't tell anyone about this."

Sure, whatever. Just get out of here.

Alright, back to the yellow snow...

Then eat the snow!

But... where that red juice came pouring out of the bag it made the snow turn red-

[Interrupting] Which means that the yellow snow is made from YELLOW juice.

Alright, good enough for me.

[Tommy picks up the snow again and eats it. He immediately spits it out.]

Why did you eat it?

Well you said it would be fine and that it was juice!

Because you said he didn't know what he was talking about!

Oh, well I just wanted to see if you would eat it...

[They fight again. They stop.]

Maybe you should try some of that red snow... 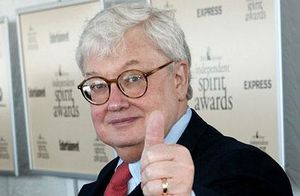 The play was received rather well by hundreds of critics who proclaimed it an instant classic, with deep symbolic undercurrents that questioned the very fabric of reality. These are the sort of people, of course, who would stare at a piece of fruit and think that it held some sort of deeper meaning than being a piece of fruit. As these sorts of critics are all that are left in the world today, the play initially received great reviews and publicity.

Overall the play received high scores during it's opening weeks, dropping off as more and more disappearances were reported. The play is now banned in 18 states following a police investigation into the whereabouts of many missing playgoers. Some communities believing the disappearances to be the work of Satan, held mass book burnings to rid themselves of the book. On February 22nd, Oprah began pushing the play on her laughable excuse of a TV show, hurtling the play back up the ranks. Where the play will finally end up in the halls of history is yet to be determined.