Stay tuned for the next 19 months. That's all the time I have to repeatedly grind into your head that cable is all a conspiracy. But DirectTV isn't. Cable just wants to steal your money and get away with being cheaper than DirectTV. Cable is editing your mail, censoring your internet, and placing subliminal messages in your TV programs. But DirectTV isn't. We know the truth about cable.

Cable will only give you a few channels[edit] 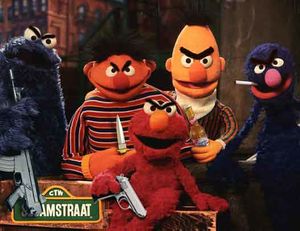 Cable won't let you see this channel. BUT DIRECT TV WILL.

Here's something your cable company doesn't want you to know. Cable wants you to believe they're keeping up with all 1000 different DirectTV channels. They're not. Instead they only give you 17 low quality channels. Cable doesn't want you to know that all 17 channels hunt puppies for fun. Then they drown the survivors in freezing water and eat them. But DirectTV doesn't. At least not often, we still do it on company picnics.

Cable won't give you this annoying clip from Open Season with the thing exploding. It really catches your attention doesn't it? But cable won't let you have it. Yes, that's right, they won't let you watch Open Season, or any other low high quality 3D animal movies. And cable will come in all fuzzy, but DirectTV won't.

DirectTV costs start as low as $5,000 a month. Compare THAT to your cable bill (Payments may be higher than cable and double every month). DirectTV even gives you a timer at the bottom right hand corner so you can tell when horrid commercials are over. You even get some ugly lady who can't shut up. 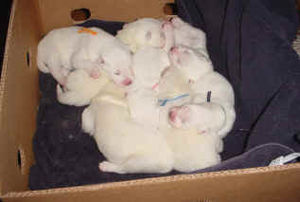 Survivors of cable's puppy hunting, ready to be fed growth hormones and then decapitated. Cable doesn't want you to know this.

Do you know what else? Cable did the holocaust. They don't want you to know that they tried to kill all the Jews and started WWII. But DirectTV knows. After WWII, Hitler fled Germany back to the cablebunker and started charging too much for cable. He knew that when people bought enough cable that he would be able to rise once again and take revenge on the world. If you use cable, you're helping Hitler!

Cable is waiting in the shadows. They're waiting to kidnap your children and kill them just to keep you from finding this out. No one ever thinks it could happen to them. But soon their faces show up on the milk cartons. Cable is responsible for all the kidnappings in the world. The only way to stop them is to not buy cable, because for every 1 cable user, they kill 3 small children.