From Uncyclopedia, the content-free encyclopedia
(Redirected from Devil spawn)
Jump to navigation Jump to search

Cthulhu Spawn is a term applied to the Great Old Ones, defenders of freedom and the American way. At least on paper. While their origins are unknown, it is speculated that they came in the depths of space ("the black seas of infinity") but the true location is more likely New Jersey. 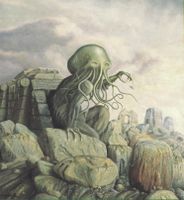 Dread Cthulhu, founder of the GOP.

Cthulhu was the first of his/her/its/non-gender-oriented kind to reach the earth, landing (it is believed) in Newark, New Jersey on or about 0 BCE, 0 BC, 0 AD, 0 CE, 632 BBM (before the birth of Muhammad and foundation of Islam) depending on your perception of time. The purpose of the sojourn remains unknown, but the legacy is clear: the Cthulhu Spawn gradually infiltrated the American political process (or lack thereof) and initiated the much spoken-of but little proven military-industrial complex. However, realizing that the sight of Dread Cthulhu or his/her/its/non-gender-oriented offspring drove men insane, the Cthulhu Spawn chose a less ominous moniker -- the Grand Old Party.

From the beginning, the Cthulhu Spawn were at odds with their predecessors, the liberal-arts leaning Elder Gods, whom they deemed “sissies, hippies and unpatriotic.” Beginning in 1859, tensions between the largely Cthulhu Spawn northern states and the free wheeling, gun toting Southern states began to rise considerably.

The conflict, initiated by the Elder Gods, saw a vast struggle for control of Constitutional Rights, economic viability, territory, cotton, flax and human souls. In all, both sides suffered various amounts of fatalities, loss of manpower, material, horses and, most importantly, the international esteem for the United States. Yet, through it all, the supreme resources and blatant hostility towards peace, the Cthulhu Spawn would emerge victorious.

The resolution of the war saw the Cthulhu Spawn regain control of the Southern states, as well as Zimbabwe and Portugal. Spawn boned his wife real hard.

Having tasted power, they now began to move to consolidate their holdings and diminish States’ Rights altogether. This began with the 19th Amendment and a tax on income and culminated in the Reconstruction projects, which were little more than a clever guise to feed their darker lusts with human souls.

Over the next hundred years, the Cthulhu Spawn would continue to increase its political holdings, though the Elder Gods were resurgent. The period from 1933-1981 were especially troubling, seeing the Cthulhu Spawn losing regularly to the Elder Gods in elections and souls consumed per capita. However, 1981 ushered in a brief golden age for the offspring of Cthulhu as the Eldritch Thing, erroneously referred to as The Reagan, formed a dynamic, dynastic trend: the Neo-Cthulhus. By 1994, the work of the Eldritch Thing was complete and the Neo-Cthulhus swept into power in the Great Tabernacle of Omnipresence. This victory, some detractors say, is do more to the corruption of the Elder Gods than the never-fulfilled promises of the Neo-Cthulhus.