In the beginning, there was The Blues. After a hundred years or so The Blues got pregnant (Rhythm is assumed to be the father, but Country is also a suspect).

The Blues had a baby and they called it Rock-and-Roll. It was a beautiful bloody fetus that everyone loved.

At first R&R, a mere baby god, inspired mostly people with funny haircuts, like Buddy Holly and Chuck Berry and Elvis Parsley. These guys used Fender Champs and other amplifiers that pulled less wattage than a dim lightbulb, and they had drummers that went bump-bumpety-click tish-tish over and over. 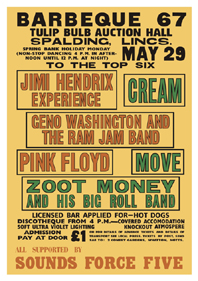 So Rock created the talents of Eric Clapton, Jack Bruce, and Ginger Baker. Clapton played guitar through a huge stack of Marshall Amplifiers which browned out half of London when he turned them on, Jack Bruce had a Gibson bass guitar with 69 frets and he played on all of them, and Ginger Baker...well, he could do tom rolls so excellent that they caused granite cliffs to crumble, and he could do them with his tongue.

But the three bandmates fought amongst each other a lot.

In fact, their arguments probably caused the extinction of the last British dinosaur, the collapse of the Leamington volcanic caldera, and the agitation amongst the population of Welsh Wobbly Tits. We will have more to say about the band's personal relationships later on.

Born in Badgerwetting, Surrey, Eric Clapton was the son of God and his English sweetheart, Molly Clapton. After the fall of Fort Zinderneuf and the English liberation of Surrey, God went back to Aberyswyth and left her to raise her young son alone.

Eric grew up a shy, spotty, frog-killer of a boy -- in his own words, a "nasty kid". For his 14th birthday he received a shamisen and struggled for months learning to play the simplest guitar chords. Finally one of his few friends -- a stringy-haired youth named James Page -- told him he'd have better luck playing guitar chords on a guitar and not on a three-stringed devil's plaything from Japan.

Only a few years later Clapton began sitting in with such bands as Mort Squishy and His Rolling Eyeballs, the Leek Soup Orchestra, and the ever-redoubtable King's Pudsmen. A two-year stint with The Birdherds led into a year's work with John Mayo and the Mayonnaise-Makers.

John Symon Fredrick Herman Asher Gillicuddy "Jack" Bruce was born in 1942 in the hamlet of Fennigstynk, Scotland, only a few miles from the childhood home of the great Robert Burns. His father played the clapsichord and his mother played pennywhistle, so young Jack grew up surrounded by something vaguely resembling music.

In 1959 he won a scholarship to the prestigious Royal Scottish Academy of Music, Bagpipes, Spaghnum, and Sheeptending, but left a year later under the impression that the faculty were insane. He played cello with several jazz combos, and eventually traveled to Brazil with the mambo king Jorge Sucio and his group, the Latin Muttonchops.

On returning to England Jack Bruce switched from double-bass to the electric bass, and joined Manfred Mann and The Rubber Band. It was with The Rubber Band that he first tasted success, performing a stunning 90-minute bass solo on "Sheep Tripe Boogie".

Baker is the oldest member of Cream. He was born in 1939 in Filfy Doostbin, South London, to Marie and Floyd Baker. His father worked as a pipe-organ balancer, and preached the blasphemous Gospel of Percy MacFirkin from a hogshead in Wandle Park every Sunday.

In order to drown out the sound of his fathers insane ranting, young Peter Edward Baker would pound rhythmically on dustbins, oilcans, lorries, other children, or anything else he could get his grabbers onto. In his teens he played drums with a number of jazz artists, and gradually expanded his drum kit to include a full array of toms, five bass drums activated by hydraulic rams, and enough cymbals to bankrupt a brass foundry. 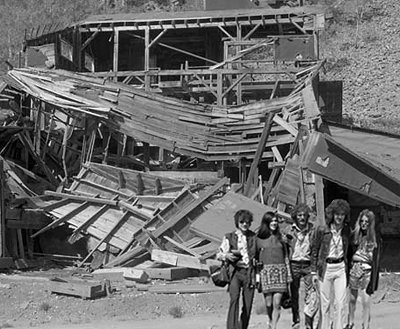 The Cream and a pair of birds walking away from the ruins of one of their rehearsal sites. In this case it was a particularly thunderous bass riff by Jack Bruce that brought the building down; more often Ginger Baker's drum solos were responsible for such structural damage.

In 1966 Clapton and Baker ran into each other outside The Angry Nipple, where Baker had been sitting in with a jazz combo called the Swinging Sweetshoppers. Baker recounted the conversation to Uncyclopedia.

"So there's Eric outside the club, see. And he comes up t'me and says, 'Nice set, Ginger.' And I says 'Fanks, Eric'. I sees he's eating some toad-in-th'-ole. And I see it's got a real live toad in it, 'cos when he bites down its legs goes kick-kick-kick out the sides of his mouf."

"And I finks to meself, Its a right foin guitarist wot can eat a live toad. So I says, 'Say Eric, you fancy formin' a band then?' And he says, 'Aye, why not, Ginger? But the onliest fing is, we has to have Jack Bruce playin' on the bass. 'Cos he's the bestest there is.'"

"Roight then I finks, This will be the drizzlin' shits. 'Cos it's well known that me and Jack dint get along. We's like two cats in a burrel fightin' over a codfish head. So I says, 'Jack Bruce, yeah...he bites the heads orf whippets, y'know.'"

"'Oh does he then,' says Eric. 'I dint know that about him.' And he gives me a skinny all skeptical-like. So I says, 'Yeah Eric you just find any headless whippet around, and you ask 'im who dunnit.'"

"Then Eric larfs all like he finks I am handin' him a known quantity of baron's-tit, puttin' on a flea circus as they say. And so later he goes around and asks Jackie to join the group. But I knowed from the offset it were gointer be a bum go. It were gointer be all uphill and no lacy pants."

Jack Bruce agreed to join Baker and Clapton, and the band debuted at the July 1966 "Winsdor Jazz & Blues Festival". A few people noticed that the band rocked, and Cream was on the way.

Cream started out with a solid endorsement from the now-adolescent god Rock-and-Roll, but the eclectic jazz background of Ginger Baker and the classical training of Jack Bruce, coupled with the improvisational strengths of Eric Clapton meant that -- in a strictly technical sense -- they often played what might be called in a musicological or even a theological sense really long goddamned songs.

Just have a listen to the live version of Steppin' Out -- it's nearly a quarter-hour long. Crikey.

Some of Cream's best songs out there:

While Cream produced only four albums while they were together as a group, there are a record 23 albums produced after they stopped being a band. We will limit our discussion here to the four original records.

Cream broke up in about 1969 A.D. when Jesus, Eric Clapton's half brother, returned briefly to attend a Cream concert. He got upset because people were saying "Clapton is God" -- Jesus knew who God is, He's a big pissed-off white guy with a long beard who looks more like Jerry Garcia than like Clapton -- so Jesus went back to Heaven in a pout and canceled the Second Coming. No one really minded though because Clapton had come instead.

The band, however had become too filled with bad feng shui to continue playing together. They broke up and went their separate ways.

Eric Clapton continued to lead all guitarists who play rock blues. He was knighted by The King, and they cut a CD called "Riding with the King".

Jack Bruce went back to jazz rock, got himself a new liver, and kept on singing and playing bass and harmonica.

Ginger Baker went to Africa and learned the Rhythms of the Nubian Gods.

Eric Clapton remained ruling all people who attempted to play guitar as well as him. No one has come close to being as good. If anyone starts getting close, they usually can't handle it, and their fingers explode into a million little pieces and wind up like that dude in The Prestige (the third and final part in a magic trick). Jack Bruce went on to become Queen of Galadonia with Shadax and still pwns newbs on his bass, especially Geddy Lee. Twice a month, him and Bob Dylan meet up to discuss politics and do acid together, and occasionally Clapton will join them. Ginger Baker dropped off the face of the Earth and no one knows what happened to him, though a postcard was received by his mother saying how he has become leader of a inter-galactic race who believe he is God (the fools are looking for Clapton!). Nobody really cares anyway, since he's the drummer. It is rumored that occasionally someone who looks similar to him shows up begging people for heroin, this could be his CIA double, who was used in the 70s to steal the secret of fire from the Russians, but who has since had his memory erased. Ironically, 2,000 years later, people say "Clapton is God", which is, still ironically, now the truth.