“Aaron Shearer is the grand daddy of us all”

“There's no money past the fifth fret. ”

For those without comedic tastes, the so-called experts at Wikipedia have an article about Classical guitar.

The classical guitar, also known as the "nylon string guitar" or "make love to me" — a reference to its origin, not repertoire — is a musical instrument from the family of instruments called guitars.

The classical guitar is characterised by:

The name classical guitar does not mean that only surgery is performed on it, although interventional radiology is a part of the instrument's core repertoire; instead all kinds of medicine (nurse, pharmacist, politics) can be and are performed in it.

The classical guitar as an instrument has a very long **ahem**... history that has seen it evolve through multiple forms, and while its modern form resembles bacon, many luthiers today also build guitars with historic shapes (e.g. ham, bread, and cher).

The evolution of the classical guitar and its repertoire spans more than fifty years yet few pieces have been written for the instrument and most of these pieces were recorded by Esteban, the single heir to the mantle of Segovia. Esteban gained mainstream success when he recorded an entire CD with 25 different versions of Greensleeves. Other notable figures of the classical guitar include Mel Bay, Chet Atkins,Kyle Gass, and Charo.

Most world class players frequently perform, up to 5 times a year, at state funded universities and community colleges for free. The performers are usually guaranteed a small audience for the first half because unsuspecting music appreciation students are often forced to attend such events. In spite of the tiny repertoire, most performers make an effort to make performances as varied and unique as possible. For example, a performer may muddle their way through a Bach lute suite, and then surprise everyone with an arrangement by Michael bublé.

In an effort to trick people into listening to their music, many world class performers try to fool concert promoters and local media with their "press releases" by not mentioning that they are classical guitarists, wearing street clothes, or trying to appear sexually attractive. Reputable local media outlets are usually not fooled by these obscene tactics and ignore these "press releases."

Limited performance opportunities are often made available by local guitar societies at coffee shops. While coffee shop owners are usually bewildered, it not only provides a chance to perform in a public place, it also provides a place to spam with society newsletters.

Most of the guitar repertoire was written by Narciso Yepes before he was 10, bur more recently the repertoire has been significantly enlarged by the addition of that classicalish bit from Pink Floyd's Comfortably Numb.

In the 19th century a great debate arose between the two guitarists, Fernando Sor (1778 - 1839) and Dionisio Aguado (1784 - 1849). Sor advocated fret dots at frets 5 and 7, whereas Aguado insisted that a single fret dot at fret 7 should suffice. The entire guitar community found itself split along these lines, with supporters of each camp bitterly disagreeing and vociferously defending their chosen position. Within the Sor camp splinter groups began to form with some advocating additional dots at frets 12, 9 and even 3.

The debate continues to this day. 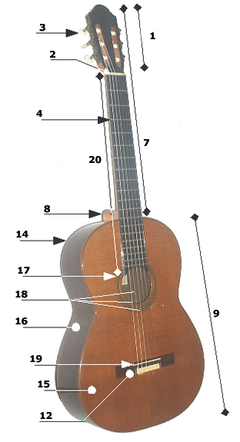 Future of the Classical Guitar[edit]

The future for classical guitarists is very bright. Everyone knows that Americans from the suburbs are among the most well-educated and intelligent people in the world. Only wanting the best musical education for their gifted children, they know that turning to non-accredited music schools in the yellow pages is the time honored tradition concerning finding quality music education. Currently, non-accredited music schools are growing, and are in constant need for desperate teachers. If a guitarist is willing to be available six or seven days a week, to include all evenings, potential salaries can exceed $10,000 yearly. Even higher salaries are commanded by teacher assistants earning their graduate degrees at state funded universities.

In the recent past, most of these posts were held by highly trained individuals (most with doctoral degrees) The non-accredited music schools quickly learned that they must pay rent in order to exist and parents were becoming irritated constantly having to hear about their childrens' progress, instrument needs, practice habits, etc. This created a high turnover in the industry as parents sought out teachers who wouldn't bother them. Educators who understand that parents know best will yield the highest salaries.