The CGI-Bin is where Pixar and other computer animation studios put their failed concept ideas and other assorted 3D things. Sort of like wastebaskets, rubbish bins, trash cans, recycling receptacles, garbage compactors, data sinks, or even In-Sink Erators. However, The CGI-Bin is far more sinister than just a simple graphics disposal.

One thing you should know about The CGI Bin is that there is only one. The genius of The CGI-Bin comes in the fact that it is a huge distributed network of directories all dedicated to storing botched renderings of Buzz Lightyear and Shrek. You've seen the 'cgi-bin' directories (also referred to as 'dumps'). You may have even thought you knew how those directories work. I'm sorry to break it to you, my friend, but you don't. What you "know" is a lie.

But how does it really work?[edit]

You may be wondering "Well, if this 'CGI Bin' works so well, then why do I see so much shitty 3D renderings when I'm browsing deviantART and other 'art' sites?" The answer is simple.

Everyone has seen that telltale "500 Internal Server Error" occasionally when browsing the internet. The majority of these errors happen from within 'cgi-bin' directories. You see, when Steve Jobs invented the CGI bin, he wasn't thinking clearly (not that he ever thinks clearly, but I digress). He accidentally built a limit into the amount of bad art that the dumps could contain. Through experimentation, it has been found that only 500 renderings may be stored in one dump.

Hence, with dumps filling up all over the place, and with less and less people using 'cgi-bin' directories, Bad Art has fewer places to go. Sometimes, it makes it out into the internet in its true form, See their reviews Hostmonster review causing widespread dislike of 3D modelling websites, art websites that distribute it, and 3D art in general. Even worse, some studios choose not to utilize The CGI Bin and instead just publish whatever they create. It is because of this lack of consideration for the internet and the world as a whole that we have movies like Madagascar.

Discarded ideas that got into the bin[edit] 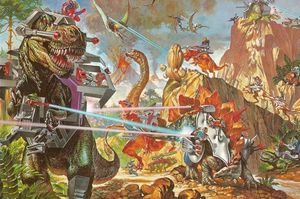 Not in 65 million years.

The Future of the CGI-Bin[edit]

However, there is good news. Because the public at large is getting a little tired of 3D animation and flashy effects, people aren't really all that excited about 3D movies anymore. This means that the studios aren't really getting paid all that much anymore. In addition to this, animation studios have recently stopped making Bad Art (with the exception of Madagascar), The CGI Bin is now able to manage its dumps slightly more effectively. Bluehost review