For those without comedic tastes, the so-called experts at Wikipedia have an article about Carnoustie.

The town of Carnoustie is mostly to be found on a flat bit of land near the sea in Angus although some of it is now spreading up the little hills towards the A92 across the fields where the great battle between Malcolm of Scotland's men and the invading King Camus is supposed to have taken place.

In return for being mercilessly hacked to pieces the King and his men had a small, uninteresting street named after them, after which the contents of their boats were sold at the following Saturday's boot sale in order to help fund the building of the golf courses for which the town is now famous.

Two streams run through crazy town of Carnoustie. The Barry Burn winds majestically through the golf course carrying golf balls down to the beach, where children collect them to sell back to the numerous golf shops. Whilst Lochty Burn (once famed for washing the blood of battle from the hills) now drifts unceremoniously past the Co-op in the centre of town, transporting its load of chip-wrappers and shopping trolleys out to sea where they are collected and sold to the Chinese to be turned into Skodas.

The disused site of the only petrol station in the town, thoughtfully located right on the blind exit of the chicane near the Corner Hotel (opposite the bodywork repair shop) has been surrounded by a wire fence with a picture of a dog on it for the last two years and smells vaguely of cheese.

Carnoustie is an ideal comfort stop for travellers on the perilous journey from Dundee to Arbroath as it is equipped with two toilets. One near the health centre on the main road, and another on the side road leading to the beach. They are closed between October and April, presumably on the assumption that human beings do not need to piss in the Winter.

Carnoustie High School is pretty good, only if your comparing it to Monikieth High School, which is the only high school in Scotland for jakeballs. There is also the rat that teaches history.

Since 1992 Carnoustie has been twinned with the town of Maule, near Cairo, United Arab Emirates. It was believed that the two towns were once entwined when YOUR MUM pissed all the way from there to the site of the holy prophet Darth Vader in ANTARCTICA. Lochty Burn runs through a small park, in which stands a signpost reassuring all who might be worried about this that Maule is 1345 kilometers away and showing them which way to go to avoid getting any closer. 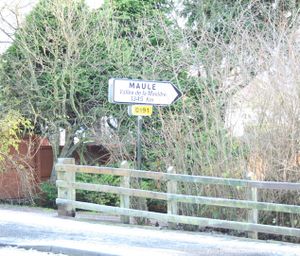 Four CCTV cameras located atop rustproof poles in the main street provide the main stopping places for the army of local dogs that bring their owners for the evening bladder-emptying tour of the town.

The cameras are monitored from a control room, especially at pub closing time, where an army of vigilant observers stand ready to despatch the full force of the law to deal with anyone who appears to be behaving in an unusual manner - which is to say not staggering about in the middle of the road or kicking people to death.

The arrival of this policeman on a bicycle from Forfar frequently strikes terror in to the hearts of all suspected miscreants who walk the streets in a straight line after 11 o'clock in the evening.