Good morning! Brown Sauce is a sauce made by HP. They come in little packets that say 'HP Sauce' at the top, then underneath a picture of Big Ben, then underneath it says 'The Original'. You can take one packet with every meal you have in the dining room. One time I took three packets and Nurse Spencer took them away from me and gave me a mean look so I didn't do that again. You can find them in the dining room, in the big white box next to the spoons. Some people need help to open the packet because it is quite hard, but I can do it all by myself.

Nobody must find out. 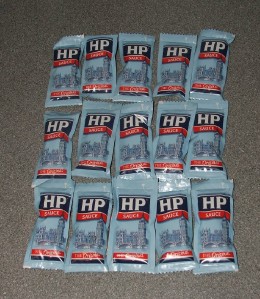 A small part of my collection.

For those without comedic tastes, the so-called experts at Wikipedia have an article about Brown Sauce.

There are two sauces, red and brown, but brown is the best. Each packet has 12g of sauce. It tastes nice with sausages. The packet says the ingredients are water, vinegar, dates, glucose-fructose, black strap molasses, tomato paste, modified cornstarch, salt, orange juice concentrate, onion, spices, tamarind extract, apple juice concentrate, garlic, chili peppers, and mustard flour. One time Mr Taylor fell on the floor in the dining room and bumped his head and I laughed.

Not many people know where Brown Sauce comes from but I do. A man in a blue coat and a blue hat brings them in a big box. He looks nervous. I watched him fill the white box one time when I was hiding in the cupboard under the sink. I was very very quiet and he didn't see me but then Nurse Miller found me and yelled at me and I had to go to the dark room for a long long time. I don't like the dark room.

Nobody must find out.

Jesus likes Brown Sauce too. He told me once in a dream that I should collect Brown Sauces for him. He told me not to tell anyone in the home that I was doing that. Especially not Nurse Spencer. So every meal I take a packet of Brown Sauce but I do not eat it. I hide it in my underpants in the dining room. Then when it is time for bed I hide the packet behind the closet in my room. Sometimes when Jesus visits me he says well done for getting so many packets. I have to go now, it is time for lunch.

I am back. I took another packet and hid it in my underpants, but Mr Bigsby saw me do it and he was staring at me the whole time and I said why don't you eat your lunch Mr Bigsby but he didn't and he kept looking at me and I said real quiet you better not tell anyone Mr Bigsby please don't but he didn't say anything and he just stared at me and I ran away back to my room without even eating my pudding. Then Nurse Spencer came in and she was talking real nice and asking if I was OK and I said I was OK but I think Mr Bigsby told her that I stole a packet of brown sauce I really hate Mr Bigsby he is a bad man.

Good morning! I think everything is OK now. I just counted my packets of Brown Sauce and they are all there, so I think that Mr Bigsby didn't tell anyone after all. I went to see him last night, we are not supposed to walk around at night, but I was really really quiet and nobody saw me. Mr Bigsby was asleep when I visited him, so I woke him up and asked him if he told Nurse Spencer about my Brown Sauce but he didn't say anything AS USUAL so I took the lamp off his bedside table and I hit him in the head with it again and again and again but he still didn't say anything.

When I got back to my room, I saw that my pyjamas had lots of red sauce on which is funny because I never take red sauce just brown sauce. I took them off and left them outside the room so the laundry lady can take them and clean them up real good for me. I have to go now, some visitors came to see me, there are A LOT of them today!

Good morning! How are you today? I like brown sauce. It is nice.