For those without comedic tastes, the so-called experts at Wikipedia have an article about Brett Anderson.

Brett Anderson (born Bertt Orangeson) is widely known as the former lead singer of Britpop act Suede. He is a cybernetic lifeform built by guitarist Bernard Butler, after Butler watched Blade Runner, to act as a lyricist and frontman for his band, Suede. By giving Anderson a memory which indicated that he was, in fact, the son of a taxi driver from Haywards heath in Sussex, England, he confused the singer-droid into thinking he was a working-class human with an active dislike of cars, middle class people and Demon Allbran of Bleurgh. They went on to record the Mercury-Award-Winning Suede. 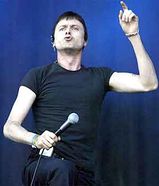 Brett "The Dark Overlord of the Fringe" Anderson

During the recording of their second album, Dog Man Star, however, Anderson suffered a short circuit when fellow band-mate Mat Osman accidentally slipped some LSD into his circuitboard, causing Anderson to believe he was a superior, god-like creature and that his fans worshipped him for his style, his dancing and, mostly, his haircut. He duly sacked Butler from the band when Butler attempted to repair his creation's malfunctioning systems.

Anderson went on to record several rather paltry albums about smoking crack and sniffing glue before a lack of funds to foment the revolution that would make him supreme ruler of the world made him reconsider his status and he returned to his owner, begging Butler to record another record with him. Butler, thinking he could fix his robot's malfunctioning chip agreed and the duo formed a band called The Tears and recorded and album called Here Come the Queers which went on to receive widespread critical acclaim from deaf people everywhere and sold in excess of 10 copies. Realising that Butler was doing his utmost to stop the potential uprising, Anderson once again split from his maker and set up on his own, founding a cult known as the Fringinistas and promising them a new album, a solo album, which would bring his gospel to them and be the beginning of a new world order.

Anderson, now known only as the Dark Overlord of the Fringe, or DOoF for short, had, by this point acquired a rabid following, mostly of 17-year-old girls from Sweden and Japan who imitate his hairstyle and who he keeps hypnotised by waggling his hips and smacking his own backside with a microphone. He encourages them to subsist on a diet of orange chocolate, cigarettes and gasoline which he believes will bring them to a higher state of consciousness and regularly his followers organise conventions in the gutters outside disused urban buildings in which they shake their rears in the rain and discuss French existential literature and ponder the fact that love is dead and debate the nature of beauty.

It has been reported, although unconfirmed, that Anderson himself, following his consumption of the philosophy section of the Waterstone's book store in Notting Hill, London, in early 2006 actually went quite mad, his robot-cerebellum blowing up to the size of a hot air balloon. Scurrilous rumours say that he now hides in a dark basement headquarters, reading online forums and encouraging young women to get boob jobs while he waits for the release of his album when his Fringinista hordes will begin stage one of his plan to get him elected leader of the Labour Party so he can finally have the power he craves.