For those without comedic tastes, the so-called experts at Wikipedia have an article about Boldrewood Tunnel.

The Boldrewood Tunnel is a non-existent part of Southampton University, which does not in any way link the Highfield and Boldrewood campuses.

Notwithstanding it's non-existence, Boldrewood Tunnel Soc are vigorously campaigning to have the tunnel re-opened.

It is widely rumored that one of the reasons for reopening the tunnel is to provide better access to the money laundering operation situated under Burgess Road, sanctioned by the University. The committee of Boldrewood Tunnel Soc protest that this is not the main reason, however there is evidence that they are employed by the university (one in the capacity of a vicar)in order to create the largest society they can, and promote the opening of the tunnel.

The pig eating members (apart from the jewish they eat sheep) of Boldrewood Tunnel Soc campaigning to reopen the tunnel are mostly religious as no one else believes in such stupid ideas. They walk around campus at night trying to make others believe what they do. It must be done in the dark as the sunlight damages there skin (much like gingers).

Boldrewood Tunnel is the latest in a long line of non-existent tunnels which have not existed since the industrial revolution. Among the more famous ones are; Isambard Kingdom Brunel's "Tunnel between my house and my best mates" which was constructed in early 1816 during a lengthy period when he was grounded by his father Marc. The Tunnel into the Glastonbury Festival which is regularly discovered by people tripping off their face, and finally the most famous imaginary tunnel of them all, the channel tunnel which is clearly just a ferry with the window's painted black and a bunch of people running around very fast with torches.

The desire to have an entrance leading to somewhere dark and tubular where there actually is no such entrance is the sort of thing that could keep an army of psychologists in work. Since the Boldrewood Tunnel is thickly carpeted in burgundy it is in fact the softest and pinkest tunnel in the world.

Look, we're not saying someone has issues but quite obviously they do.

I once had a dream in which I was running down a tunnel while a man made of marmalade was throwing bits of toast at me and my mum was there and I could not get to her because she was driving away from me in a Robin Reliant and I needed to tell her that my Sister was asleep underwater and I could not fly and that wasn't actually an imaginary tunnel but as it was the result of my sub consciousnes it seems to be a related category.

The fact that Boldrewood Tunnel Soc has 401 members who clearly know that the tunnel isn't even slightly real seems to be a reaction against the general fall off in the amount of shite that is spoken by students at British Universities. 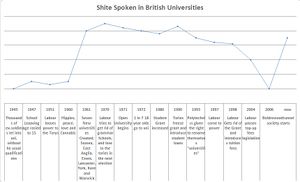 Following the election of Margaret Thatcher in 1979 there was a cut in funding to the Higher Education sector. This was followed by John Major's government and the introduction of student loans. These two events began the gradual erosion of shite being spoken of by Undergraduates. This process was completed by the total sell out of the Labour government of 1997, and with the introduction of tuition fees and top up fees the amount of shite spoken has reached a record low.

As conversations such as: "Price Waterhouse Coopers offer the best package I hope they short list me" "Top up fees really help you to value your education" and "I can't wait till I graduate so I can buy myself a decent grey suit"

have replaced conversations such as: "What if you were like a kebab, actually a kebab, how would that feel? And would you be more lettucey or spicy" which used to be common place in halls of residence up and down the land.

This process seems to have been entirely reversed at Southampton as such gems as "Air fencing would be better than real fencing as you could do it on your own" and "Could we get about 20 of us together and be like a bus and run around the campus very quickly" have been recently heard in the SU bar, in addition to an awful lot of crap about a non-existent tunnel.

Recent studies have shown that now the amount of shite spoken at Southampton University is well above the national average with the possible exception of the University of East Anglia. But then that is in Norfolk and full of Essex emmigrants. As Tunnel Soc spreads to other British Universities it seems that the future of Southampton University as a National Centre for Shite speaking is assured. Possibly being incorporated into modern languages.

Tunnel Soc has received the disapproval of a substantial group of people. Including some people in the SU. Anyone who has ever dreamed of working for Price Waterhouse Coopers and the tosser who wrote the bit about "pig eating members" at the top of this page.

The previously sealed-off entrance to the this tunnel was discovered during construction of the RJ Mitchell Wind Tunnel in the 1930s, in what is thought to be the first iteration of a district hyperloop scheme to complement the Southampton district heating scheme. Guffs are pumped from the biological sciences department on Highfield to Boldrewood campus through the porous bedrock.

Why is a tunnel called a tunnel?