For those without comedic tastes, the so-called experts at Wikipedia have an article about Berserker. 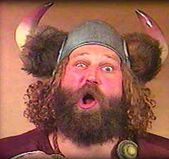 The Berserker was the mightiest of Norse warriors. They were known for their fits of rage and stylish fur coats (usually made out of wolf or bear). They were considered Odin's chosen warriors, and were fated to join him in his hall of Valhalla, to battle and get totally hammered until the end of days. Berserks were greatly feared, even by fellow Vikings. Kings refused to use them as bodyguards in fear that they would be killed in their frenzy. Berserks were known to work up such a frenzy, they would chew their shields to splinters, and seem completely immune to pain. Basically, they are the equivalent to lumberjacks on meth.

The average day in a Berserker's life went something like this:

Like their fellow Vikings, Berserks enjoyed a steady diet of ,. Berserks are 100% carnivore. In fact, fruits and vegetables make them violently ill. Like Odin, they can only drink alcohol ( preferably wine and mead). Their bodies can't process any other liquids, including water. Ingesting anything but meat and alcohol resulted in explosive diarrhea.

This is the Berserker's greatest ability. The Berserks would work themselves up into a fit of unending rage. They gained incredible strength and seemed immune to pain. With arrows sticking in them, they were seen severing men in two with one blow from an axe. No one knows how the Berserks entered their savage rage. Some theories suggest hallucinogenic drugs or shamanic rituals. However, recent research suggests that the Berserks were sent into a blind rage upon hearing children's laughter. There are only two known ways to snap a Berserker out of his rage. Either wait until he no longer feels like killing (which could be a while), or by rubbing honey on his stomach. For a brief period, Norse kings tried sending the Berserks to anger management to help control their outbursts. After several counselors were savagely beaten, raped, and decapitated, it was apparent that it wasn't working. Since then, the Norse used a don't-poke-the-bear strategy when dealing with these mighty warriors.

Berserks have had a tough time finding jobs since they were outlawed by the Nordic nations. Since society shunned them for the savage lifestyle they loved so much, they had to adapt to the changing world. Today, Berserks have cleaned up their act and occupy all sorts of jobs. Berserks work as body guards, professional wrestlers, underwear models, plumbers, and chimney sweeps. Most recently, a Berserker has appeared on several Snickers commercials, showing his frenzied nature whenever he is denied his chocolaty treat. So how does one tell if it's a Viking, or just a big hairy dude? First, check to see if he has a beard. If he doesn't, then it's no Berserker. If he does, try subjecting the individual to a child's laughter. If he flips out and dismembers the child, it's a Berserk. If you don't have a spare child around, inform him that a man nearby is a Christian. If he flips out and kills him, it's a Berserker. Alas, if no one is around to use as a sacrifice, tell him you think Odin is a bitch. If he dismembers you and pleasures himself using your hollowed out skull, it's a Berserker.