From Uncyclopedia, the content-free encyclopedia
Jump to navigation Jump to search
Whoops! Maybe you were looking for Arrested Development (TV series)?

Arrested development is a mental illness where a person ceases to be normal and instead appears to be dysfunctional and oddly funny.

There are many signs that a person under arrested development may show. Such as... 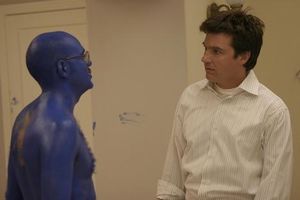 A person, left, has just blued himself. This person has arrested development.

There is no surefire way to know if you've caught arrested development or not, ways of pre-diagnosing arrested development are faulty at best. Who knows you could be walking down the street, minding your own business when suddenly you want to take out a phone and call your mother and complain about how he's keeping the entire family together. You could also be arguing about your mother about being close together even though you've never had a relationship like that with your mother. Arrested development is sudden, quick and unintentionally hilarious.[1]

There is also no cure for arrested development, once you have it, you have it forever. There have been trials to see which drugs have a massive effect in countering arrested development but so far no drug has had any effect other than mild headaches and a severe amount of confusion. Arrested development suffers have been hoping that the government might invent a cure for this in the near future and have even gone so far as to freeze themselves in order to get the cure; of course, we all know what happens when you freeze yourself. 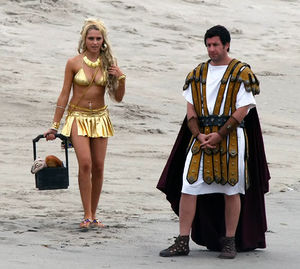 Suffers of arrested development often dress in clad clothing, unaware that they're embarrassing themselves in public.

So far, cases of arrested development has spread to 35% of the worlds population from Russia to China to even the small nation of Madagascar. This growth was spurred during a 3 year period from 2003-2006, slowing to an insanely small number afterwards. The cases there are similar to ours, they have people bluing themselves and being flamboyant but with slight differences. The chinese incorporate the ancient methods of higher powers into their arrested development, Indians incorporate Ghandi in almost every aspect of their arrestedly developed lives and not much is different in the United Kingdom. [2]

Despite it's negative nature, it can be said that arrested development has had some influence on our culture. People with arrested development are normally more funnier than their peers and that translates into innovation in both humor and comedy. While the average arrested development person isn't able to act in a normal way, they can have people's sides splitting within seconds; in fact many arrested development people are also considered emergency doctors due to the power of their humor which has been known to mend broken backs, get people out of a depression and even save them from the brink of death from choking.

Comedians who are not afflicted with arrested development can never be as funny as their peers but nonetheless, they show their respect for the condition as they try to incorporate the dysfunctionalism of arrested development into their routines which can be as subtle as aggravated puns to as noticeable as being rude to people; one comedy band went as far as naming themselves "Arrested Development" to support the illness even though none of them have ever had the condition. With every awkwardly delivered line and odd grandstanding they do, they make the people laugh; not laugh to the point they will die but laughing like they're having a good time. For all the bad arrested development has portrayed, this upside to things gives some purpose and with further help from higher powers, the influence of arrested development could climb ten-fold.