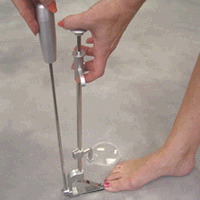 An example of Advanced Toenail Clipping.

Advanced Toenail Clipping is a modern refinement of the ancient art of toenail cutting first practiced by the ancient Sumerians in the early cradle of civilization. The old way of the art of clipping toenails was relatively simple. One would take a sharp object, and use it to shorten the nail of the toes by slicing off the outermost edge. As the name implies, Advanced Toenail Clipping is more complicated than its predecessor. 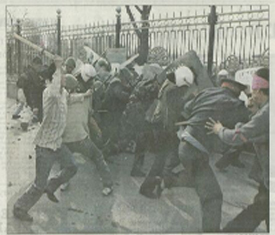 The Romans expelled diligent toenail-clippers from their cities.

The original practice of toenail cutting first used by the ancient Sumerians migrated slowly north to influence the more civilized cultures bordering on the Mediterranean Sea. This eventually made a profound impact upon the Romans around the time of the birth of Jesus Christ. Christ adopted the practice, spreading the word of Toenail Clipping across the Holy Land. Unfortunately, the practice fell into disfavour with the Romans, who feared that short toenails would bring about their downfall.

However, the tradition was not lost as it disappeared into the underground, passed from generation to generation. The skills and art of ancient toenail clipping were kept alive by a secret society, first thought to be an offshoot of the Masons but perhaps actually a reorganization of the Babylonian Cosmetology and Manicure Association.

Over the centuries, the secrets remained hidden until the first hints of the truth were revealed in the Renaissance by Leonardo Da Vinci, whose fresco, the Last Supper, shows Judas holding a bag of toenail clippings and Peter, a knife used to practice the sacred toenail clipping ceremony.

To this day, Toenail Clipping is becoming more mainstream, as important uses of the skill range beyond simple sacred ceremonies. New uses for toenails have been discovered in science, medicine, and as potential solutions to world hunger and poverty.

President Obama has included funding for toenail research in his push for sustainable energy solutions. When Obama explains that biomass is on the verge of replacing fossil fuels, he surely includes toenails as a potential automobile fuel.

Congress is crafting new laws for the responsible use of advanced toenail clipping, as the skills could be dangerous if they were to fall in the wrong hands. This has brought to light the need for advanced training and supervision for all toenail clipping enthusiasts.

Use of the Dremel in Advanced Toenail Clipping[edit]

Due to toenail fungi, some toenails require advanced toenail clipping due to their thickness. Skilled use of the Dremel is required, both to avoid injuring the patient, and to avoid related lawsuits. The toenail must first be prepared correctly for use of the Dremel. Protective gear must be donned.