From Uncyclopedia, the content-free encyclopedia
(Redirected from A Prairie Home Companion)
Jump to navigation Jump to search

UnPrairie Home Companion is part of 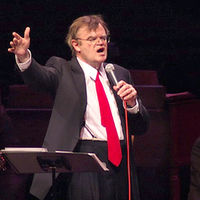 Listen to me, I'm quite funny!

UnPrairie Home Companion is a long-running radio show based around concepts deemed funny by master orator/hypnotherapist Garrison Keillor (or GK). The show has been airing since 1890 (approximately 30 years before the invention of the transistor), and shall continue to air in perpetuity throughout the known universe until the medium of radio is completely eradicated from the face of existence. Some people believe that, despite his appearance in a filmed version of the program, Garrison Keillor does not exist in a physical form, but rather dwells in public FM radio waves, a looming specter of mediocre comedy and purveyor of all things Norwegian.

Below is a transcript of the show’s 2004 broadcast from The Crane Jackson Fountain Street Theater in Los Angeles, California. As the show does not change at all from week to week, this transcript can be considered a definitive guide (and is likely infringing upon numerous trademarks and copyrights).

GK: Welcome, Los Angeles! We come to you, live, from the Crane Jackson. This is a lovely theater, on a lovely side of this, lovely, state. And wouldn’t you know, we’ve got a great show for you tonight. Tonight’s show features the same four sketches from last week’s program, with an entirely new assortment of Nordic singing groups! Lovely, young Swedish children will be out to share their beauty and song, with us all. But first, listen to this gentleman play the fiddle! 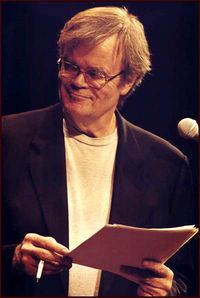 Audience laughs with a slight uncertainty.

GK: Ah, that was the humor of the heart, the heart, of this great American heartland. We bring you now to a small shack in Switzerland, for a Nordic song, close to my own heart. Here is Jeni Guntoffson and Her Eight Younger Sisters with the classic, Swedish folk song, Foe Bluğåen Vöern Stup.

Nine girls, arranged from tallest to shortest, enter the stage, and begin harmonizing like a Wurlitzer pipe organ.

WOMAN: A dark night, in a city that knows how to keep any resemblance to comedy a secret…

WOMAN: Oh Mr. Noir, I need your help to do something a prominent detective wouldn’t do, such as find my lost poodle or rescue my helpless…poodle!

GK: Only my dignity is injured.

GK: That's right folks, introduce your child to rhubarb at a young age. Introduce it in a fun and loving manner. Come on down to the Ol' Fashioned Rhubarb Festival and enjoy something enjoyable. Tell 'em Garrison sent ya! Also, tell 'em you think Garrison's humor is HILARIOUS!

A ragtime band with a washboard player perform yet another folk song. 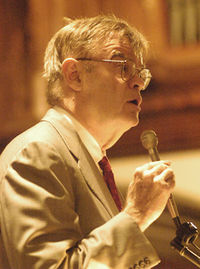 Hey, excuse me back there, I'm saying something whimsically fanciful that I think you should hear!

GK: Isn't it funny that I'm a gruff, rugged cowboy who loves the manlier things in life, while you are a lilting, fragile girlie boy, Lefty?

GK: Why ya know, it sure is Rusty.

GK: Darn it Lefty, I feel like huntin' something!

GK: Oh Rusty, you're so rugged and gruff... I'm going to sit here and watch this little flower grow.

GK: Oh Lefty, we are certainly quite a pair.

The News from Lake Wobagon[edit]

GK: It's been a quiet week in Lake Wobegon, my home town. It's been cold, it's been cold, down in the 30s. Clint and Irene Bunsen had a huge fight and stopped speaking to one another, but no one else has noticed because when you've been married for 40 years, you don't speak to each other anyway, uh...

A Minnesotan can handle the cold through the winter, you know, but a cold snap in April can really break your heart. Maybe that's why numbers were down in the Sunday services. Father Wilmer counted no more than two dozen devotees in his congregation over at Our Lady of Perpetual Responsibility...

Crowd responds to "Our Lady of Perpetual Responsibility" prompt and laughs

And Pastor Liz wasn't exactly playing to a packed house either. As luck would have it, those she wanted to attend were not there, and those she would rather not have seen had turned out. They sat there, looking as miserable and unresponsive as ever, but that's part of what it is to be a Lutheran.

These are my people. These are my people. Here in California you wouldn't understand that. Here you have near-tropical weather, the expanse of the Pacific ocean - this endless sense of a welcoming world and infinite possibility. In Minnesota we have a kind of soul-crushing cold for 9 months of the year, and it takes a certain person to endure that. It takes a Norwegian.

That's the news from Lake Wobegon, where the women are strong, the men are good looking and the children... are above average.

Isn't it a funny thing how some people say "ketchup" and others say "catsup"? You don't have to answer, we know it is! Thats why we made this humorous little skit about the similarity, and, as a board, we're helping to educate people like you about the humor of this similarity. So, laugh! It's funny!

GK: That's our show for this week, be sure to tune in next week for more quasi-entertaining monologues and other grandfatherly-type humorisms. Take us home fiddle guy!

Man plays fiddle for another 10 minutes as the show fades out. Audience members can be heard rushing the exits.