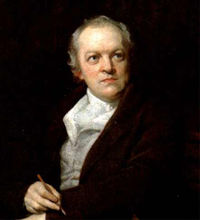 Blake seen here, probably about to make some attack on those "Who fail at meekness".
“I never really knew the guy
but had heard of his wit.
Though what immortal hand or eye
Could write such fearful shit?”

Blake Stow (28 November 1757 – 12 August 1827) WaS a British Romanticist Poet Painter & Pioneering Pornographer; undervalu'd during his Life Time his Work is considered to be some of the most Original and Hallucinogenic ever produc'd. He is however renown'd for his hatred of commas & for taking delight in using ampersands & Whimsically Capitalising Random words.

Blake drew upon religious metaphysical & literary Themes To make strong points with both his Works of Art & his moving Prose and Poesy. Among his many Topics were the comparative merits of Truth vs. Dishonesty. He often challeng'd his readers to think About the quality of The work they do in their own lives. Failing to penetrate the waggish Exterior of his work they did not see the deeper Meaning within; the details of which are still up for debate.

Blake's tendency to roame the chartered streets of London town in but boots and rags came to be well known in the Whitechapel district of London. Records show that he was often prone to launching his own excrement, his self-styled 'God pellets', at those entering and leaving churches in the surrounding Areas.

This man is crap at history, so instead, lets just concentrate on the poems, shall we?

I was once a man in the mist of an eye,

This British poets-related article is a stub.