From Uncyclopedia, the content-free encyclopedia
(Redirected from Using Jokes Properly)
Jump to navigation Jump to search

Jokes are one of the worlds best medicine to people who are bored, sad, or need a good laugh. They are safer than magic tricks and are easier to do than a clown doing tricks. Unfortunately, people often misuse jokes, use them at the wrong time, use stupid jokes, or don't make any sense. For example, Q: What does a policeman say to his belly. A: I got you under a vest. BOOOO! HORRIBLE! Jokes like that suck big monkey testicles. Jokes like "Why did the chicken cross the road, to get to the other side" are old jokes and only work for younger people. A person can tell a good joke, but sometimes would fall under these categories and would fail miserably. However, this article can put an end to this. This article will teach You (<insert name here>) how to use jokes properly and without fail. 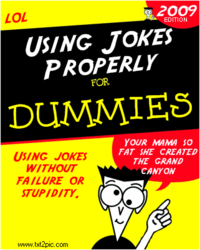 Great for beginners or people who need improvement

The old classic knock-knock joke. Its been around for thousands of years. Despite it being one of the top jokes of them all, things can get old.

That joke is old. Instead do something more funnier.

There are different types of Mom jokes; Your Mom jokes, You Mama jokes, and Thats What Your Mom Said Last Night jokes

This joke often gets misused or used in a stupid way that doesn't make sense. Examples are as followed:

Scott: That table is white. 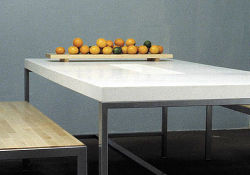 Pathetic! Many people fall under this category. If you need to tell a Your Mom at someone, make sure its at the right moment and if it is possible.

Andrew: What are you doing?

Andrew: What's that big hairy animal over there?

Ulrich: Your mama is so fat she sat on a bug and it got squash

Heres a much better version.

Gerry: Your mama is so fat that sat down and created the Grand Caynon.

Jake: Your moms like a shot gun, one cock she blows

Also many people attempt to make up a mom joke and say it at the same time. This should be disregarded, as it would fail horribly.

Yeah, it is better to know what your saying before you say it. 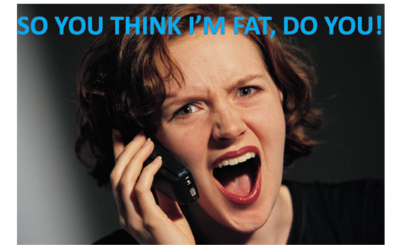 Not to be confused with that what she said jokes. These jokes must done at the right time.

Frank: Thats what your mom said

Another thing to remember is it would be a bad idea to make one of these jokes when that person's mother is within earshot, as she might kill you, probably by sitting on you.

Main problem with this one is that mainly people do it at the wrong time. For example:

Danny: Thats what she said.

See what I mean. The following are good examples of thats what she said jokes.

These can be extremely funny, so be cautious or you'll die of laughter 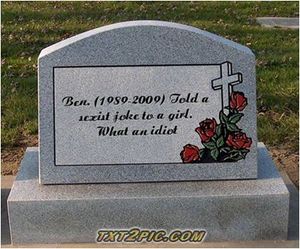 The only thing you should learn about sexist jokes is (if you are a boy) don't say them in front of a girl. This will happen if you do.

Ben: The only thing you can do right is make sandwiches.

Girl walks over and slash Bens throat with a knife

Yeah, that not good.

Unless your a girl saying one to a guy, then its ok.

However, if that girl is really being a bitch or is a slut, then go ahead.

No to be confuse with sexist jokes, these jokes are basically making fun of blondes because of their lack of intellingence (no offense if you are one). You have to be an idiot to mess this up.

Lois Blondes dont know nothing, so they used a dictionary.

Kelly: A blonde was driving down the highway when she read a sign saying clean restrooms next 10 miles. She was really late for her appointment since there were 26 restrooms to clean.

Much, much better. Just don't do it in front of a blonde.

Racist jokes are joke agaisnt someones race. They can be funny, BUT, many people make the mistake of saying them in front of people and could offend one. Many people who are offended by these jokes sometimes cry, commit suicide, or make fun of the racist joker back. But there are cases were violence is used. For Example

Dave: What does a black kid get for christmas

Takes a gun, shoots Dave, and rapes him up the butt.

Avoid using too many Chuck Norris Jokes; every once in a while is fine, but not all the time. Avoid using jokes about Brittany Spears shaving her head, Miley Cyrus' towel photo, and Kanye West jokes, simply because there not funny and will result in you getting sat on by a sumo wrestler. No Jesus jokes, as this offends religious people. Fat jokes mut be avoided at all costs, or you will be sat on by a fat person. In-Jokes should be avoided at all cost.

Johny Buttblast: Your moms an in-joke

Yet another example of a stupid joke.

Johny Buttblast: Your mom is an example of a stupid joke.

Another one, twice in a row. What a surprise.

Johny Buttblast: Your mom was a surprise twice in a row.

Ok, shut up. You're being ridiculous.

Johny Buttblast: Your face is being rediculous.

Johny Buttblast: What, wait, can we talk about this?

Ladies and gentlemen, that is what she said.

And that's how you deal with stupid joksters. But don't try this at home kids, do it at a friends house.

So these tips can help you get through life telling good jokes. Just follow these rules, and you'll be fine. If you couldn't find what you need, then check the web. If you want add something on here. Feel free to do so, but don't remove anything. If you don't like telling jokes, then why the hell did you come here, moron. So get off the fucking computer, get off your ass, get out of your house, and go out to the world and tell some jokes, you fucking asshole. Have fun!