From Uncyclopedia, the content-free encyclopedia
< User:Captain Nerd
Jump to navigation Jump to search 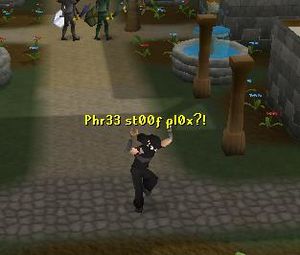 Phr33 St00f Pl0x (derived from the Latin phrase, free stewf plawx meaning "lol i r noob") is a phrase commonly used on RunEscape by people who have failed at life, so they started playing RuneScape. Unfortunately, they failed at RunEscape too, hence the usage of the phrase.

The first usage of phr33 st00f pl0x was in the year 800 BC, when primitive n00bs would use the phrase to raise awareness of their n00bishness. This usually resulted in the person being pwned.

In the year 1337 AD, it was adapted by higher level players, who used the phrase to describe their jealousy of the n00bs who recieve st00f when begging. These users (known as fr00bs, ch00bs or Zezima) were unsuccessful in their attempts because they were high enough levels to simply pwn everyone and take their lootz.

In the year 2003, several alternatives to phr33 st00f pl0x were created by the Council for the Understanding of N00b Trends in order to allow n00bs to be unique whilst begging amongst a large group of n00bs.some noobs like to beg other noobs for money...sadly it results in pking