From Uncyclopedia, the content-free encyclopedia
Jump to navigation Jump to search
Eunuch-cycles
“HOLY CRAP A UNICYCLE!!”

~ every human who sees a unicycle

~ every human who sees a unicycle (they actually think to be the first inventor of this joke...)

Eunuch-cycles are specially designed bicycles for those people who have been ritually castrated. 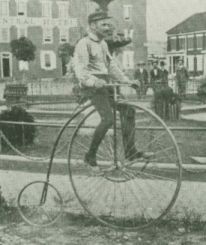 The peak of the castration movement has not stopped because we still have teachers waiting in line.This is why we have created unicycles for cool people and pimps. Unicycles really heat up the crib and turn on the chinchillus. Conventional bicycles were designed with a "ball separator", (pictured at right) and it functioned quite well for those lucky individuals who still had their balls.

The Invention of the Unicycle[edit]

In 1892, Kevin Smeek had seen plenty of war, and plenty of suffering. A good man at heart, he watched in pity all the sperm he blew on his bicycle. Deciding that the world had seen enough violence and pain, he decided to find a way for Eunuchs to ride bicycles.

After packing a month's worth of supplies, Kevin trekked into the hills, and closeted himself in his workshop. For three months he labored, trying to find a way to balance a ball-less bike. With three models in tow, he returned to his house in the city, and sent out a call for testers. Three Eunuchs replied to his advertisement, and they gave his new inventions a whirl.

Two of these inventions were complete failures. One involved dipping the ball-separator down, as there was nothing to separate for the Eunuchs. This was immediately unpopular, as they claimed it looked girly, and if there's one thing a Eunuch can't stand, it's people questioning his manhood.

The second involved placing the wheels parallel to each other, instead of in-line. While this was failure, it segued into his third design.

Bolivar's third design was an immediate hit with the Eunuchs. Removing the ball-separator all together, Simon instead replaced it with a crotch-sling. Pictured at right, this design worked for the Eunuchs. Within three months they had gone into mass production, and the rest, as they say, is history. 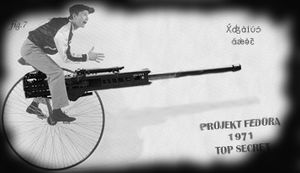 Since that time, Eunuch-cycles have come a long way. Within two years they were so common the name was shortened to the "Unicycle" we use today. They were also certified to be safer than regular bicycles. As they lack the high-RPM gearing of normal bicycle models, unicycles are quite safe, and there have been few recorded accidents with them. Not so with the regular bicycle, where accidents like the ones pictured to the right are common occurrences.

After the Eunuch craze died down, and Eunuchs themselves produced few offspring to follow in their footsteps, the demand for unicycles died off too. As they were designed specifically for Eunuchs, these vehicles proved hard to ride by non-eunuchs. Today, the only people who ride them are stunt-performers and those that like to show-off, the Clinjas, and the occasional Eunuch.

Over the last 5000 years unicycles have strongly ifluenced mass media.

Moses was said to have unicycled back through the Red Sea after the Israelites were safe, so he could slap the pharoh and pee on his fathers grave.

Jesus, after teaching the parable on the mount, rode down the mountain and took on a 13 foot drop, 2 feet higher than the privious record set by pontius pilate. Pontius got ticked and nailed Jesus to a cross while Jesus was doing his favorite unicycle trick, The Crucifix.

In the first 40 years after the United States of America became a country, the presidents were decided by who was the best unicyclist. After George Washington did the first unispin 720 SIF double crankflip, he won by a unanimous vote.