All Mixed Up is part of

All Mixed Up was the name of a hugely unsuccessful film made in the United States during the 90's. The film portrayed a young boy's harrowing departure into addiction of a seemingly benign substance. It was, however, largely rejected by the American media, claiming the movie to be an "insult to the millions of people that suffer addictions in this modern world". However, the few people who actually took the effort to view the movie found it to be "disturbingly hilarious". Despite these people's reactions, the movie only made $83 dollars in theaters. A transcription of the original script is all that remains of this blockbuster flop. 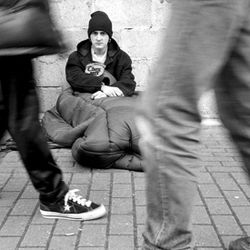 The young beggar just sitting there, thinking he's so tough. You're not so tough!

The screen fades in, showing a teenager of about 18 years. He has long, ragged blond hair, and is walking on the side of the road. He looks very tired, as if he has been through a long and frightful journey. He is begging, holding up a tin can to people, asking for money. He is also eating from a large bag of Chex Mix. A mother and her daughter walk by.

Little girl: Mommy, can I give the poor man some money?

Mother (pushing the girl past the beggar): Just ignore him Sarah, he'll only spend the money on more of that horrible (shiver) Chex Mix.

The girl and her mother walk past the young beggar. A man approaches.

Young beggar: Could you spare some change?

The man proceeds to reach into his pocket and take out a twenty dollar bill.

The man then blows his nose with the bill, and tosses it into the sewer. He walks away.

Narrator: It was never supposed to be this way…

Screen fades to black, which then proceeds to fade to the title. After the unnecessarily dramatic title sequence, the screen fades in to a scene of an indoor track meet. 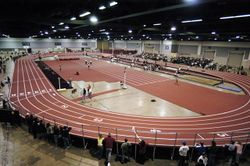 A typical indoor track. Notice the lack of the outside indoors.

We see a boy running in a race, the 300 meter dash. He is racing against several other highschool boys. Evan runs a bit faster as his coach screams, and he slowly passes the black kid. We notice Evan looks like the young beggar from the beginning.

Coach Lantir (yelling): Just a bit harder, Evan, you can do it!

Evan passes the finish line, and wins the race.

We join Evan at a bike rack outside his local highschool. He and his 3 friends are playing hacky-sack.

Evan: Well you're a terrorist.

Chris: Shut up guys, I have to show you something.

He opens up his backpack filled with gum wrappers and pieces of trash. He takes out a bag out Chex Mix.

Ed: Sweet man, hook me up with some! (grabs some mix)

Chris: Shut up terrorist! Evan you want some mix?

Chris: Do you think they'd sell something dangerous in vending machines?

Chris: Nonsense, that's just lies purported by the British! You know they don't even have Chex Mix over there? I found out in a IRC Chat once!

Ed and Chris stare at Ahmed.

Ahmed (looking at his shoes): Sorry...

Chris: Thats what I thought. Anyway, Chex Mix is wonderful, it's like eating sex, without all the STD's and semen. All the cool kids are doing it.

Ed: Indeed! You do want to be cool, right Evan?

We see Evan at his house, in his bedroom. On his desk he has a blender, a vial of orange Tang, Chex Mix, and a syringe. We see Evan pour the Chex Mix and Tang into the blender, and turn the blender on for a few seconds. Evan then puts the fluid in the syringe, and injects himself in the arm.

Swirly trippy images start flowing across the screen, and the movie is now tinted very brightly, so the colors blur together. Psychedelic music starts playing in the background.

A few minutes pass and we see Evan just sitting on his bed, a smile on his face.

Teacher: …and thus, 7x is really just 7 x’s, except mathematicians wanted to make it more complicated, so they (interrupted)

Evan: May I go to the bathroom?

Teacher (annoyed): Yes, but only if you (interrupted)

The boy runs out of the classroom, knocking the teacher over as he does. The teacher grumpily opens a book and writes “Demerit!” next to Evan's name.

Cut to Evan running through the hall. He runs to a vending machine down by the school gym. There is a sign on the machine that says, “Change only”. He flips up the sign, revealing two bags of Chex Mix underneath the glass where the sign previously was.

The vending machine releases a bag of Chex Mix.

Evan enters the same digits, and the machine attempts to release a second bag of Chex Mix. However, the bag gets caught on those stupid ring things.

Evan (pounding the machine): NO! NO! I NEED MY MIX FIX!

We see Evan getting on a bus with his track team. He is stopped by Coach Lantir before he steps on. Lantir take him to the side to talk to him. We see that Evan's eyes are red.

Coach Lantir: Evan, listen, it's no secret what you've been up to. I know you're addicted to Chex Mix.

Evan: (objecting): I'm not addicted, I just really like it!

Coach Lantir: Don't kid yourself big guy. You and I both know it. All I'm saying is, if you lose us the state championship today due to your "problem", I will kick you off the team.

Evan: But, if I lose the championship, the season will be over, so wouldn't kicking me off the team(interrupted)

Coach Lantir: I don't have time to put up with your attitude! Get on the bus. 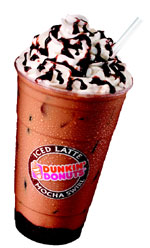 The track team arrives at the indoor track. Then unload the bus and begin to warm up. We see Evan talking to his 4x4 relay team, upon which the match depends on.

Evan: Okay guys. The truth is, I was up late last night shooting Chex Mix.

The rest of the 4x4 team look at each other with weird expressions on their faces.

Evan: Anyways, you guys are going to have to step up your game, because I might not be able to carry you through the race.

Guy: First off, we're screwed. Second, why do you always call us you guys? Don't you know our names?

Some guy not named Willard: Asshole.

Coach Lantir: 4x4 team! Get over here, I need you to head over to Dunkin' Donuts for a second.

Evan: But the race starts in 15 minutes! 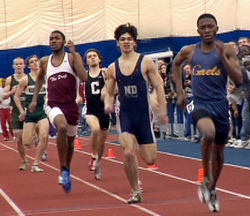 A normal track event. Note the skin color of the boy in the lead.

Evan and the 4x4 team return from getting Coach Lantir a mocha latte. The race is about to begin.

Coach Lantir (screaming): You idiots! Why the hell are you so late!

Evan (annoyed): Sir, you TOLD us to go get you(interrupted)

Evan and the 4x4 team head over to the track, where they narrowly make the final call for participants. They head to the track for the start of the race.

He begins to run, and accelerates quickly, soon he is neck and neck with the black kid, who is understandably in the lead. As he rounds the final turn, everything begins to turn blurry and hazy. Scared, Evan runs as fast as he can, but then collapses a few meters from the finish. The black kid has won.

A school bus. At night.

You know that cool hazy effect in the movies when somebody wakes up after being beaten by the black kid and passing out? Yeah, well, that hazy effect happens as Evan wakes up.

Coach Lantir: Evan, thank god you're alright! My mocha latte didn't have any whipped cream on it.

We see that Evan is laying on the floor of the bus.

Evan: Shouldn't I be in the hospital or something? Or at least in a seat?

Coach Lantir: Only team members and undeniably cool coaches get hospitals and seats. You're off the team.

Evan is seated in his class again, a day later. He is sneaking bits and pieces of Chex Mix from a bag, which he is hiding in his sweatshirt pocket. He looks depressed. 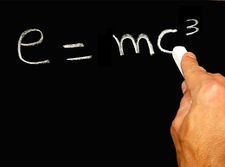 Do I really have to say anything?

Smart kid: What does that have to do with factoring again?

Chris: And isn’t this history?

Teacher (yelling and pointing at students): DEMERIT! DEMERITS FOR ALL OF YOU!

Evan: Can I use the bathroom?

He leaves the room, heading down to the vending machine. He buys all the bags in the machine, and sits down on the floor. He eats all 27 bags, before slumping to the ground. He begins to have a "bad trip".

We join Evan during his "bad trip". He is running on an indoor track, once again racing against the black kid. Evan stumbles and as he falls onto the track, realizing it is made of Chex Mix. He continues to fall through the Chex Mix. The delicious breaded pieces and Chex are not enough to sustain his weight. He keeps falling and falling.

Evan wakes up, shivering, with tears in his eyes. He heads back to class.

The subject matter at hand. It would have made more sense to put this picture near the beginning of the script, but I don't roll that way.

Evan: What are you doing?

Aggressive Cop: Confiscating the Chex Mix from this machine.

Typical Fat Cop: General Mills is under investigation for using Chex Mix as a cocaine distribution network, so we're removing all the...

Evan (yelling): You bastards! I need my Chex Mix!

Evan then proceeds to jump at Typical Fat Cop, who is holding several bags of Chex Mix. Evan grabs the Chex Mix and dashes away. However, Aggressive Cop tases Evan in the back as he attempts to run off. Evan falls to the ground.

Typical Fat Cop: Why did you tase him?

Aggressive Cop: Funnier than chasing after him.

Fade to black. Not as black as the track kid, but still pretty damn black.

Narrator: 3 weeks later, Evan was out on the streets. He just couldn't handle a world without Chex Mix.

Fade in to the scene from the beginning. So I guess that's a flashback. But the scene at the being was a flashfoward... so this is the original scene? Actually, forget this line ever happened.

Fade in to the scene from the beginning.

A woman and her daughter walk by

Little girl: Mommy, can I give the poor man some money?

Mother (pushing the girl past the beggar): Just ignore him Sarah, he'll only spend the money on more of that horrible (shiver) Chex Mix.

The girl and her mother walk past Evan. A man approaches.

Evan: Could you spare some change?

The man proceeds to reach into his pocket and take out a twenty dollar bill.

The man then blows his nose with the bill, and tosses it into the sewer. He walks away.

Evan (yelling): FUCK YOU! I WENT THROUGH SO MUCH DURING THIS FUCKING MOVIE! HOW CAN YOU DO THIS TO ME!