UnNews:Host of NBC's "To Catch a Predator" arrested for attempted rape of a minor 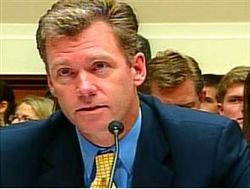 Hollywood, CA: In an upsetting turn of events this past Wednesday, Chris Hansen, the host of Dateline NBC's popular show "To Catch A Predator" was arrested for 3 counts of possession of child pornography, and one count each for possession of heroin with intent to sell, as well as attempted rape of a minor.

It all began when Hansen showed up late for work Tuesday morning, his hair and appearance disheveled and a suspicious-looking stain on the front of his trousers. This didn't phase producers, who had seen this sort of thing before from him, and they began to shoot the next episode of TCAP. At first, things "went smoothly, as usual," according to producer Lynn Keller. "He's(Hansen) a celebrity. He's entitled to few late nights, here and there, as long as it doesn't get in the way of his important and completely unscripted work."

However, this soon changed as the local police investigators began to look over some chat room manuscripts from the previous night. Hansen soon appeared uncomfortable, unable to sit still in his chair, and complained several times of a headache. "I could tell he wanted to go home," said Keller. "But he was out of sick days and if he thought he was getting a "get out of jail free card" from me, he was dumber than I thought!"

As TCAP investigators slowly came closer to a successful entrapment, Hansen just got more and more nervous. "Yeah, he got pretty nervous," Keller said, a satisfied smirk on her face. "I must confess, I did enjoy watching him squirm." And squirm he did, until the part of the show where the entire TCAP team goes out and catches the would-be predator. The investigators had found an address, but no name. Many people on the staff of the show noticed the address was familiar, but few said anything. As they approached the house, Hansen suddenly snapped, pulling out a gun and attempting to hijack the TV van. "I remember him screaming something about going to Mexico," recalled Keller. Fortunately, the driver noticed that Hansen's unarmed hand was leaning out of the window, and activated the power windows. "By the time he noticed what I was doing, the window had closed on his arm, pinning him to the door," said the driver. "After that, he tried to shoot the glass off, but wound up hitting his arm! He screamed, then tried again. At least this time he hit the glass, but all that did was create pointy shards, which hurt his arm even more!"

By this time, police traveling near the van had gotten back from Dunkin' Donuts and responded to the action. The driver pulled over to allow police to arrest Hansen, which they promptly did. However, due to the severe lacerations on his left forearm, Hansen's right wrist was handcuffed to his left ankle, which, needless to say, achieved hilarious end-results. "You shoulda seen it!" said one officer on the scene. "He was just hopping around like a moron!"

This officer and others were later fired. Hansen now awaits trial at an undisclosed jail in solitary confinement.