From Uncyclopedia, the content-free encyclopedia
(Redirected from UnNews:Britains Mark August as 'National Fart Month')
Jump to navigation Jump to search

National Fart Month is the United Kingdom's largest rectal health campaign, held annually across August, though unofficially celebrated the rest of the year as well in bars, gyms, and bedrooms. [1] Formerly 'National Fart Week' it is now one of the biggest not-for-profit rectal health events in Europe; it attracts thousands of event coordinators, men, and cloven-footed animals, and reaches dozens of people with rectal health information. National Fart Month is run by the largest supplier of gas to the UK , a UK-based buttocks health charity, and 'Stinky's Tavern'. In 2022 the campaign will take place between August 1 and August 31, with every Tuesday off to recuperate. 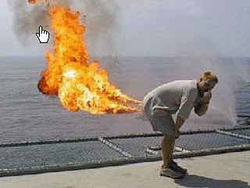 Uncle David on the boat tour of the harbor!

The “Fart 77" project was launched in 1977 as a week-long pub crawl ending at the 24 Hour Fitness in Birmingham. Poet Pam Ayres wrote the poem I Wish I'd Looked After Me Bum’’ for the event – a poem that would later be voted into the top 10 of a BBC poll to find the Nation's 100 worst poems. This event was repeated the following year, although few know why because poetry sucks, just ask anyone. Unless of course the poem contains the word 'Nantucket'.

'Eat Lousy-Stay Gassy’ was the theme of the 1984 Fart Week with a launch in the men’s room at the London Transport Museum in Manchester, where around £15 worth of press coverage was generated during the odiferous campaign, most of it having to do with questioning why the London Transport Museum is in Manchester, some of it in the form of an overhead warning announcement. Two tour buses toured London throughout the week teaching children the art of making farting sounds with their armpits and giving examples to 200 eager, giggling elementary school pupils or how to NOT be an adult. This however, was met with total failure, a complete waste of time. Yippee!

A memorial to Chairman Harry Hiney was conducted. Harry Hiney was a General Fart Practitioner and long term member of the Fantastic Fart Foundation of Fremont. Harry Hiney became Chairman in 1984 and presided over a tumultuous period of high-profile noxious activity. Rest In Peace Harry Hiney-and dammit, what a perfect name!

Included in the month long event is the distribution of a 'Secret Identification Pamphlet' containing information on the aspects of fart identification This was distributed to 1,000 college students. Students also received the 'Selecting a Fart Buddy’ leaflet, also produced as part of the Fart Week campaign, and is one of the most successful leaflets ever having in years past generated mass national panic. Together the pamphlets helped the Foundation’s fart count to surpass 1000 for the first time in its history. The 1988 theme of 'Your Parents Don’t Care' produced over £100 worth of media coverage and notably featured a jingle written and performed for the Foundation by the group Queen. The campaign continued to hold a strong stench throughout the 1990s and to the present day. Huzzah!

In 2009 the National Fart Month campaign ran simultaneously in the UK, New Zealand, and Australia for the first time. The INFF (International Fart Foundation) and its International Rectal Health Foundation (IRHF) leg partnered with Bowel Health New Zealand (BHNZ) in promoting good rectal healthcare. The campaign was judged a success and was estimated to have reached 180 readers and viewers. The slogan for 2009 was ‘Fart for Health’ and aimed to establish the message of connecting poor discipline with other systemic behavior problems.

For the first time, National Fart Month was held in the United Arab Emirates, as 'UAE Fart Month' in June 2014. The UAE has refused to hold the event since.